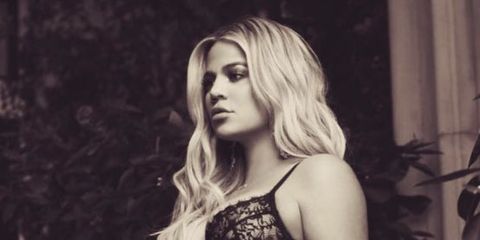 Khloé Kardashian is preparing to give birth very soon, and she's documenting the entire process. Unlike sister Kylie Jenner, who managed to keep her pregnancy mostly a secret, Khloé has shared constant baby updates on social media since revealing she's expecting, including behind-the-scenes photos of her gorgeous bump. And now, Khloe has stripped down to pose in some extremely skimpy, lacy, black underwear.

In the stunning shot, Khloé poses in lingerie for fashion photographer Sasha Samsonova—and everything about the photo is gorgeous:

This isn't the first time that Khloé has disrobed to showcase her baby bump. In a recent campaign for Good American's Good Mama maternity jeans, Khloé posed topless, demonstrating just how great the new denim range is when you're getting further and further into your pregnancy.

In my @goodamerican denim “The Home Stretch” 🦋 Good Mama 🦋

Speaking to People, Khloé discussed her aim to make maternity clothing sexy. She said, "Until this point, no maternity denim options spoke to me—most of what's out there lack the stylish, fun details that I want to wear, or simply isn't flattering." As her latest lingerie photo demonstrates, Khloé is finding pregnancy a sensual time, and wants to enjoy every second she has left before she gives birth.

Khloé officially revealed that she was pregnant in December 2017, teasing her due date when she posted a photo in January along with the caption, "Officially 6 months."

Khloé has been seeing boyfriend Tristan Thompson since August 2016, when they were first spotted together in Beverly Hills.

Related Story
Khloé Kardashian Ready to Give Birth in Cleveland
Amy Mackelden Weekend Editor Amy Mackelden is the Weekend Editor at HarpersBAZAAR.com, where she writes about entertainment, celebrity news, beauty, and fashion.
Advertisement - Continue Reading Below
More From Celebrity
How Goop's Vagina Candle Came to Be
Kim and Kourtney Throw Punches in New 'KUWTK' Clip
Advertisement - Continue Reading Below
Selena Spent Weekend Helping Solve a Murder Case
JFK and Jackie Kennedy's First Year of Marriage
Kate and William Dress Up for Dear Evan Hansen
Kobe Gave His Vanessa a Dress From 'The Notebook'
Will There Be a 'Bachelor' Spin-Off for Seniors?
Beyoncé and J.Lo's Nail Art Tribute to Kobe
Demi Lovato's Gorgeous No Makeup Selfie
Kate Middleton’s Brother Is Making a Documentary