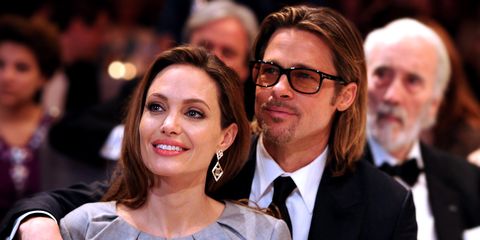 Bad news, Brangelina fans—according to new reports, Brad Pitt and Angelina Jolie's divorce is due to be finalized within the next few weeks. It truly is the end of an era.

Recently, news broke that Jolie had been seeing a new man, amid rumors that Pitt has been dating new people too. A source revealed to Entertainment Tonight in March 2018 that, "Angie has told some friends she isn't ready to date, but she has been seeing a handsome, older-looking man who is a real estate agent."

And now, the Daily Mail reports that the former couple has "agreed on terms" for their divorce, and that they "are believed to have finally made their relationship 'respectful' for the sake of their six children." Sadly, it looks like Pitt and Jolie are never, ever getting back together.

The Sun is also reporting that the divorce is imminent, and that the progress Jolie and Pitt have made is actually really positive: "It’s a huge turnaround from where the marriage ended, especially given the claims Angelina made against Brad, but they are now on pretty good terms." The pair are ready to co-parent their six kids, but move on romantically.

The divorce news follows reports that Pitt has made some positive changes in his life since his dramatic split from Jolie. As People noted last month, "Brad seems to be in a better place. The separation was very dark for him, but lately he looks healthier and happier. He seems excited about life."

Related Story
Angelina Jolie Is Dating a Real Estate Agent
Amy Mackelden Amy Mackelden is a freelance writer, editor, and disability activist.
This content is created and maintained by a third party, and imported onto this page to help users provide their email addresses. You may be able to find more information about this and similar content at piano.io
Advertisement - Continue Reading Below
More From Celebrity
Why Will & Kate Wouldn't Hang Out With Harry
What Happens on Katie's Season?
Advertisement - Continue Reading Below
Katie Holmes' Gingham Dress is Summer Perfection
Ben Affleck Had a Sweet Father's Day Celebration
Selena Talked Being Mocked Over Her Mental Health
Olivia Wilde Was Asked About Harry Styles Romance
Gigi Shared the Sweetest Photo of Zayn and Khai
Meghan Shared the Cutest Update About Archie
Meghan's Heartfelt Father's Day Gift for Harry
Sophie Turner Shared a Sweet Unseen Pregnancy Snap