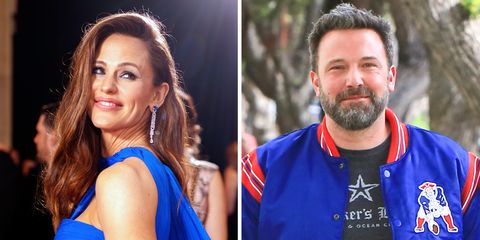 Ben Affleck is making the most of filming his next movie in Hawaii. Over the Easter weekend, ex-wife Jennifer Garner and the couple's three children joined Affleck for a short break. But does this mean a reconciliation between Garner and Affleck is in the cards?

According to People, "They made a family trip to interact with dolphins, sea lions and stingrays. They spent several hours at the park and looked like they had the best time. The kids were all very interested in learning about the animals. They all seem like huge dolphin fans."

But for fans hoping that the former couple might be getting back together anytime soon, that's sadly not the case. Garner and Affleck apparently stayed in different locations during the trip to Hawaii, with Garner enjoying some chill out time with friend and trainer Simone De La Rue.

According to People, "During the trip, Garner, 45, is staying at a resort while Affleck is staying at a nearby house. While the couple’s three kids are spending time with their father, the actress is enjoying herself with a female friend." Garner, as usual, is just being a great mom, by taking her kids to visit their dad on a short break from work.

The publication also points out that Affleck's new girlfriend, Lindsay Shookus, visited the actor in Hawaii last week, which also suggests that his relationship with Garner is purely about co-parenting right now.

The Hawaii trip follows reports that Affleck previously "begged" Garner to give their marriage another try. She said no.

Related Story
Ben Affleck Responds to Brutal New Yorker Article
Amy Mackelden Amy Mackelden is a freelance writer, editor, and disability activist.
This content is created and maintained by a third party, and imported onto this page to help users provide their email addresses. You may be able to find more information about this and similar content at piano.io
Advertisement - Continue Reading Below
More From Celebrity
George Won't Be Forced to Go to Boarding School
Diana Would Have Written a Memoir Too, Friend Says
Advertisement - Continue Reading Below
A Slice of Diana's Actual Wedding Cake Is For Sale
Matt Damon Trolled Ben Affleck and Jennifer Lopez
This Old Video of the Queen Saying "Nah" Is LOL
Diana Had a Secret Message on Her Wedding Shoes
Will's Friends Made "Jibes" About Kate's Mom
William Will Suffer "Worst" from Harry's Memoir
Simone's Boyfriend Sent Her the Sweetest Message
Harry's Friends Don't Want to Be in His Memoir