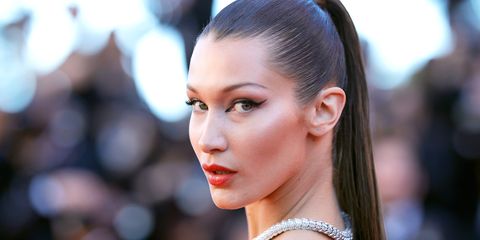 The Hadids aren't strangers to battling online trolls, so it shouldn't come as a surprise that Bella took to a fan account yesterday to defend Kendall Jenner.

Related Story
The Weeknd’s Writes Songs About Bella and Selena

The fan account, called @ballahadid, posted a photo of Jenner and Hadid side by side, and asked the pressing question, "Kenny or Bella?" As you might imagine, the responses were incredibly varied, and some were borderline offensive.

Which brings us to the one comment that Hadid took umbrage with. One commenter decided to grace the world with some of the mean thoughts rattling around their skull, describing the photo as:

"2 fake bitches sitting in a tree, first comes the nose job, then come the lips, oh and don't forget the built in cheeks. lmao y'all tripping fam, money can get you a new face but not a nicer personality which these two girls need."

"I wish you would know either of our personalities. And not only that, I wish you would only grasp a heart of your own. Blessings to you sweetheart. Jealousy is a cry for help that I wish I could help you with."

Sticking up for her fellow model and friend, Jenner, Hadid asked that the commenter consider their personalities, as well as their looks. Throw that Burn Book away, sweetie!

Bella's sister, Gigi Hadid, previously had to defend herself against body shamers who criticized the model for being "too skinny." Hadid revealed that she has Hashimoto's disease, and that people shouldn't be so quick to judge others.