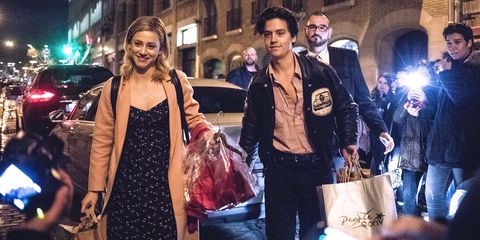 After months of trying to keep their off-screen romance a secret, Cole Sprouse and Lili Reinhart have finally confirmed their relationship status...in the city of love. The two were photographed kissing and holding hands on numerous occasions in the streets of Paris this week. They are in France attending Rivercon, a French convention about the show Riverdale.

Fans also caught them walking in the streets together.

Last week, Sprouse had "no comment" on the subject of their relationship when one fan asked him at PaleyFest in L.A.

And still, neither Sprouse or Reinhart have officially confirmed they're dating—though all the kissing and hand holding is all the proof we need.

Related Story
Everything We Know About 'Riverdale' Season 3
Alex Warner
Advertisement - Continue Reading Below
More From Celebrity
A Look at Royal Family Portraits Through the Years
Are The Weeknd's 'After Hours' Lyrics About Bella?
Advertisement - Continue Reading Below
Kendall and Harry Had a Moment At the Brit Awards
Dwyane Wade on Getting Zaya's Pronouns Right
Harry Styles' Diana-Inspired Brit Awards Outfits
Jenna Dewan and Steve Kazee Are Engaged
Kim Seemingly Tried to Kiss Kanye on a Kiss Cam
Ashley Graham Continues to Spread Body Positivity
'Bachelor' Victoria F. & Peter's Ex Had a Fight
Watch Meghan Attend the Ballet with a Puppet