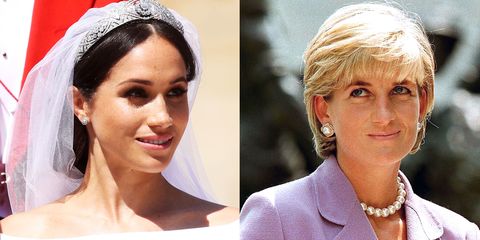 Update 5/19: Meghan and Harry honored his late mother, Princess Diana is several ways on their wedding day. For starters, the archway in front of St. Georges chapel was decorated with white garden roses—Diana's favorite flower.

According to Kensington Palace, "The spring blooms include Forget-Me-Nots which were Diana, Princess of Wales’ favorite flower. The couple specifically chose them to be included in Ms. Markle’s bouquet to honor the memory of the late Princess on this special day.

During the ceremony, one of Diana's older sisters, Lady Jane Fellowes, read a tribute to Harry's mom—a passage from the Old Testament, Song of Solomon 2:12, which goes:

Meghan also paid tribute to Harry's mom, choosing to wear a wedding gown with a similar neckline and minimal lace.

Original: When Meghan Markle walks down the aisle next month at her wedding to Prince Harry, she plans to honor the late Princess Diana in an important way.

Following the announcement that Markle and Prince Harry have selected their wedding flowers, it's now been revealed that, amongst their selection, is a very special tribute to Prince Harry's mother.

According to ELLE UK, Markle's wedding bouquet "will be made up of white garden roses to symbolize" Princess Diana. London-based florist Philippa Craddock will create the floral displays for the royal wedding, as announced by Kensington Palace.

The White Garden at Kensington Palace is, of course, completely white, and its head gardener told Country Living in August 2017:

"Diana wore a lot of white and creams. Certain pieces in the exhibition stood out like the famous Elvis dress, as well as some of the photos from the Mario Testino shoot in 1997 where she wore cream. The whole feel of the exhibition, those photos and the dresses was quite radiant and the feeling was quite uplifting which is what we wanted the garden to be."

Prince Harry and Markle's engagement photo call took place in the Sunken Garden, where the White Garden is based, at Kensington Palace, so it's fitting that their wedding arrangements will draw inspiration from one of Princess Diana's favorite places.

In her first TV interview with Prince Harry, following their engagement, Markle revealed, "It's so important to me to know that she's a part of this with us."