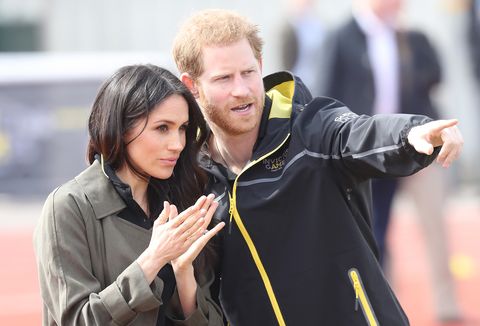 Prince Harry and Meghan Markle are less than two months away from their wedding, but they aren't letting their big day fully dominate their attention. They're also making time for something else near and dear to their hearts: the Invictus Games.

The Invictus Games are an international sporting event for wounded, injured, and sick servicemen and women. Both currently serving members of the armed forces and veterans are invited to participate. Prince Harry started the Invictus Games in 2014 after attending the Warrior Games in Colorado in 2013. The Warrior Games are a similar event based in the United States, but Harry wanted to bring the spirit of the event to the UK.

Harry and Meghan arrived in Bath in southwest England today to meet with participants at the UK team trials for the Invictus Games Sydney 2018 at the University of Bath Sports Training Village.

The couple looked chic and casual in comfortable, matching attire.

Meghan wore a Jacket Babton for Aritzia and jeans by Mother Denim. The couple cheered on and spoke with the athletes at the trials.

Getty Images
Kayleigh Roberts Contributor Kayleigh Roberts is the weekend editor at Marie Claire, covering celebrity and entertainment news, from actual royals like Kate Middleton and Meghan Markle to Hollywood royalty, like Katie Holmes and Chrissy Teigen.
This content is created and maintained by a third party, and imported onto this page to help users provide their email addresses. You may be able to find more information about this and similar content at piano.io
Advertisement - Continue Reading Below
More From Celebrity
Why Isn't Archie Mountbatten-Windsor a Prince?
A Body Language Expert on the Oprah Interview
Advertisement - Continue Reading Below
See an Adorable New Sussex Maternity Shoot Photo
Why Is the Royal Family Called "The Firm?"
Read Serena Williams' Statement on Oprah Interview
The Internet Reacts to Meghan and Harry Interview
Prince Harry: The Queen Was Advised Not to See Me
The Palace Had Concerns About Archie's Skin
Harry Says Racism Was "A Large Part" Of Leaving
Stacey Abrams on Her Election Wins & What's Next