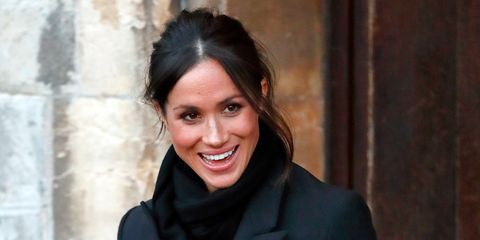 In just a few short weeks, Meghan Markle will become a member of the British royal family. The former actress is preparing to marry Prince Harry and start a life in England, but that doesn't mean she'll forget where she came from. Here's what you need to know about Meghan's family, from her parents to the distant and estranged relatives who are coming out of the woodwork.

Meghan is, by all accounts, very close to her mom, Doria Ragland. Not only do Meghan and her mom spend lots of time together, but Doria is the one member of Meghan's family who got a chance to meet and bond with Harry ahead of the wedding.

In September, Doria traveled to the Invictus Games in Toronto to meet Meghan's royal love—and they hit it off beautifully.

Harry and Meghan discussed Doria during their sit-down interview with the BBC following news of their engagement.

"Her mom’s amazing," Harry said during the interview.

Meghan admitted that her family (and friends) worried about how quickly things seemed to move in their relationship—but that Harry definitely won them over.

"I’m sure at the onset, both my parents and my close friends were concerned because we got very quickly swept up in a media storm that was not part of my life before that, but they also had never seen me so happy," she said. "And I think also once my friends were able to really meet Harry and my mom, who we’ve spent a lot of time with, who’s so much fun...It was just obvious that no matter what we were being put through, it was just temporary."

Doria, who lives in Crenshaw in Los Angeles, is multitalented, just like her daughter; she's a yoga teacher, a licensed social worker, and a jewelry maker. She was training as a makeup artist on the set of General Hospital when she met Meghan's father—he was the show's lighting director. Doria and Meghan's father, Thomas Markle, divorced when Meghan was six years old, and Meghan lived with Doria but saw Thomas regularly.

Thomas Markle is 73 years old—12 years older than Meghan's mom. Like Meghan, Thomas has experience in the TV world, and has even won an Emmy award. In addition to his stint on the ABC soap, in the ‘80s, he worked as a camera operator on the sitcom Married With Children.

He was divorced when he met Doria, and had two children, Tom Jr., and Yvonne (also known as Samantha) from the previous relationship.

Thomas lives what's been described as a "reclusive" life in Mexico these days, but Meghan's half brother says she and her dad "are very close and they stay in close contact."

During the couple's post-engagement interview, Meghan revealed that Thomas and Harry hadn't yet had a chance to meet.

"He’s talked to my dad a few times, hasn’t been able to meet him just yet," she admitted.

Still, all signs point to Thomas attending the wedding in May.

The Sun reports that Thomas will walk Meghan down the aisle on her big day and he's been photographed reading up on Great Britain ahead of the trip, which shows how adorably seriously he's taking everything.

“Thomas [Senior] is overjoyed to be beside his little girl on the day she becomes a princess—even if he has to battle his demons to get there," a source told The Sun. “He’s not exactly thrilled at facing the world’s glare. He lives a reclusive life in Mexico. But nothing will stop him from having Meghan on his arm for the big day."

Meghan's half-brother, Thomas Markle, Jr., is 51 years old and, obviously, shares the same father as the Suits actress. According to The Sun, Thomas Jr. lives in Grant's Pass, Oregon, and works as a window fitter. The Sun also reports that he was arrested last year on charges of domestic violence. While some reports had stated that Thomas Jr. and Meghan are still close, other friends have refuted this and say they actually haven't been in contact for years. He recently told DailyMailTV that his sister has "always been a princess" and that "it was just obvious from day one that she was destined to be somewhere really big."

Meghan's half-sister, Samantha Grant (née Yvonne Markle), 52, also shares a father with the former actress. Samantha is a former model and actress who, according to the New Zealand Herald, has also gone by the names of Yvonne Marie Grant, Samantha Grant Markle, Samantha Rasmussen, and Yvonne Markle-Hale. She's been openly critical of Meghan, calling her half-sister a “social climber,” and saying that "Hollywood has changed her. I think her ambition is to become a princess."

Samantha is writing a tell-all which will reportedly be titled The Diary of Princess Pushy’s Sister. It's been reported that Samantha plans on being in London during the royal wedding to act as a correspondent.

Just a month before the wedding, she went on a Twitter rant, blasting Meghan for inviting 2,000 strangers and and not her own family. One of the tweets reads: "Smoke and mirrors cannot hide the elephant in the room. Out of respect, tradition, and humanitarianism, the #Markles should be invited if 2000 complete strangers are invited. Our uncle who got her the internship, brother, me, best friend of 30 years Nikki Priddy, nephews. Fact." Though Samantha's account is private, the tweets can be seen on Daily Mail.

Samantha currently lives in Florida and apparently hasn't had much contact with Meghan since 2008, when she was diagnosed with multiple sclerosis.

Despite all the negative quotes, she has also said some kind things about Meghan to the press. She told Entertainment Tonight, that Meghan is "just very beautiful and conservative, very real, very giving."

Member's of Meghan's extended family have come out of the woodwork in the lead-up to her wedding to Prince Harry.

Meghan Markle's nephew Tyler Dooley, and his mother, Tracy, recently appeared on Good Morning Britain to talk about Meghan. Tyler is the son of Meghan's half-brother Thomas Markle Jr. Although Tyler and Tracy admitted to not having seen Meghan for years and said they didn't expect to be invited to the wedding, they had nothing but nice things to say about their relative.

"I don’t think we are getting invitations, but that is fine, we are so proud of her," Tracy said.

Related Story
These Royals Had Illegitimate Children (Allegedly)
Kayleigh Roberts Contributor Kayleigh Roberts is the weekend editor at Marie Claire, covering celebrity and entertainment news, from actual royals like Kate Middleton and Meghan Markle to Hollywood royalty, like Katie Holmes and Chrissy Teigen.
This content is created and maintained by a third party, and imported onto this page to help users provide their email addresses. You may be able to find more information about this and similar content at piano.io
Advertisement - Continue Reading Below
More From The Ultimate Guide to the Royal Family
Harry Carries Briefcase That Reads "Archie's Papa"
Meghan Markle and Prince Harry Arrive in NYC
Advertisement - Continue Reading Below
Princess Beatrice Has Given Birth to a Baby Girl
How Meghan & Harry Spent Their 2-Year Anniversary
Charlotte Has Two Major Milestones Coming Up
Kate Made a Very Common Shoe Shopping Mistake
The Queen Is Lawyering Up, Apparently
Harry & Meghan Are Still Close to the Queen, TYVM
Archie Inspired Harry and Meghan to Take a Stand
Harry & Meghan Had a Hard Time Leaving Royal Life