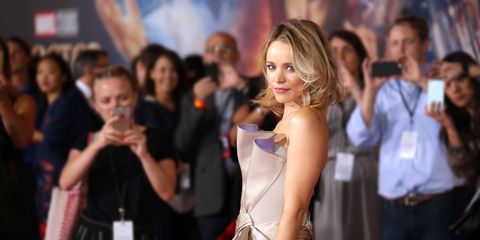 Congratulations are in order—according to multiple reports, Rachel McAdams has given birth to a baby boy!

Hollywood Pipeline broke the news, sharing a photo of McAdams with her boyfriend, Jamie Linden. They were spotted while hiking, with Linden cradling the new baby boy as they went on the family walk.

According to the Daily Mail, McAdams was first spotted with Linden in April 2016, sparking rumors that the pair had started dating. And JSYK, Linden is the screenwriter responsible for Channing Tatum classic, Dear John.

Basically, it's beyond incredible to hear that the original Regina George is now a mom.

Back in February, Life & Style reported that McAdams was expecting her first child. According to their source, McAdams and Linden were spotted while having dinner in Atlanta on February 13, and the actress apparently "looked to be at least seven months pregnant!" But the pair managed to stay quiet regarding the alleged pregnancy, and McAdams is known for avoiding the spotlight whenever possible.

It's worth noting that the Mean Girls star has kept an extremely low profile since Toronto Film Festival last September, when she walked the red carpet, and made several appearances, solo:

McAdams has often discussed her desire to start a family in interviews, telling Marie Claire in 2015 that she'd like to have children at some point. And way back in 2009, the actress told People that when it came to kids, "having a few would be great," and that she was already "looking forward to it someday."