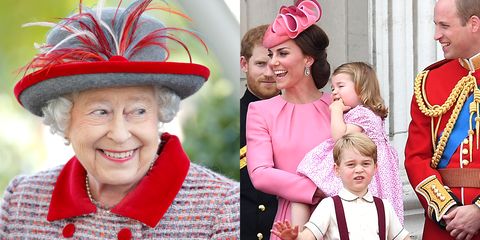 In a new documentary called The Queen's Green Planet, Queen Elizabeth II gives several insights into what life is like in the royal household, especially with so many young great-grandchildren (she has five and a sixth on the way!).

According to ELLE UK, in the new documentary, the Queen discusses what Christmas is like now that there are so many little ones running around. Speaking with one of her castle attendants, who announces that he's just perfectly decorated the Christmas tree, the Queen replies, "Yes, that is always the problem, as the children love knocking those [decorations] off."

Basically, Prince George, Princess Charlotte, and Mia Tindall help put the Christmas decorations up, only to pull them off the tree again.

But Queen Elizabeth II wasn't too mad about her great-grandchildren's naughty behavior, as she continued, "Well my great-grandchildren do. Anyway, they enjoy themselves. And the great thing is to make them decorate it and they're a bit more careful. It always looks jolly."

The Queen's new documentary explores how we can all preserve the natural habitat for future generations, something Angelina Jolie is also very passionate about, which is why she also features in the film.

Of the Queen's passion for nature and the environment, Jolie reveals in the documentary (via People), "You know she’s just this really lovely lady who really cares about people around the world, and she really cares about the future, and she wants your grandkids and her grandkids to be able to be running around, enjoying nature and other cultures... She thinks that really matters and I agree with her."

Related Story
What Kate Middleton Wore to the Royal Wedding
Amy Mackelden Amy Mackelden is a freelance writer, editor, and disability activist.
This content is created and maintained by a third party, and imported onto this page to help users provide their email addresses. You may be able to find more information about this and similar content at piano.io
Advertisement - Continue Reading Below
More From The Ultimate Guide to the Royal Family
Meghan and Diana Had Similar Issues with the Queen
The Queen Insisted on Cutting a Cake with a Sword
Advertisement - Continue Reading Below
Harry Texted Kate, Not Will, When Lili Was Born
Kate's Kids Want Her to Stop Taking Their Pictures
Kate Wore a Pearl Bracelet That Used to Be Diana's
Harry's HRH Title Was Removed from a Diana Display
Harry and Meghan Are Trying to Keep the Peace
Films That Pull Back the Curtain on Royal Life
Harry Was Left to Suffer After Diana's Death
How Queen Elizabeth II Got the Nickname Lilibet