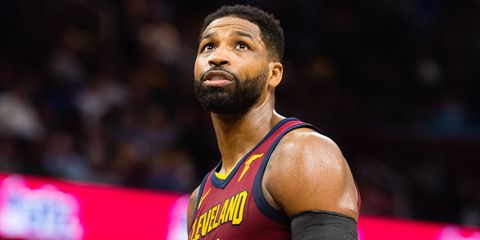 Last night, amid rumors that he cheated on girlfriend Khloé Kardashian, Tristan Thompson returned to work—which, in his case, was the basketball court. Thompson's team, the Cleveland Cavaliers, played their final home game of the season against the New York Knicks, and the hometown fans were reportedly not pleased with Thompson.

According to E Online, Thompson was met with boos from the crowd when his image was shown on the big screen in the venue. This week, multiple videos surfaced that appear to show Thompson kissing and "motorboating" other women. The videos were allegedly taken while Khloé was pregnant—she's expected to give birth to their first child, a daughter, any day now.

At least one fan made a sign to show their support for Khloé, proudly displaying "We Heart Khloé" at the game. A picture of the Kardashian supporter is making the rounds on Twitter.

While Tristan and Khloé have yet to comment on the videos publicly, her family is said to be rallying around her and reports are coming out that she's "distraught" in the wake of the scandal.

Kayleigh Roberts Contributor Kayleigh Roberts is the weekend editor at Marie Claire, covering celebrity and entertainment news, from actual royals like Kate Middleton and Meghan Markle to Hollywood royalty, like Katie Holmes and Chrissy Teigen.
This content is created and maintained by a third party, and imported onto this page to help users provide their email addresses. You may be able to find more information about this and similar content at piano.io
Advertisement - Continue Reading Below
More From Celebrity
The Palace Just Shared Prince Louis Birthday Pic
Meghan and Harry Talked Every Day During UK Trip
Advertisement - Continue Reading Below
J.Lo Wishes A-Rod's Daughter a Happy Birthday
Irina Shayk Shared a Rare Photo of Her Daughter
John Travolta Talked Dancing With Princess Diana
Meghan Markle and Archie Speak to the Queen
Who Is Alexandria Ocasio-Cortez's Partner?
Did Charles, Harry, and William Mend Relationship?
The Kardashians' Most Body-Confident Nude Shoots
Chrissy Teigen + Meghan Markle Spoke About Loss