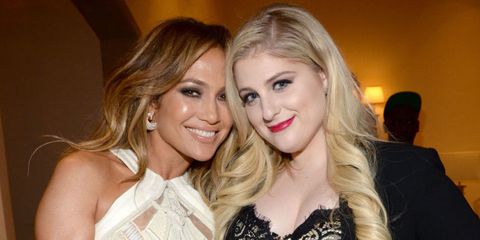 Last week, Jennifer Lopez debuted the first track off of her highly-anticipated new album with a fabulous, all-out performance on the series finale of American Idol. Co-written by Meghan Trainor, "Ain't Your Mama" is a catchy, feminist anthem seemingly made for getting ready with your best girlfriends—but rather than shooting straight to the top of the charts, the song instead received an immediate backlash after it was revealed that it had been produced by Dr. Luke.

Currently, Dr. Luke is in the midst of an ongoing legal battle with Kesha, who first filed a lawsuit against him in 2014 for alleged sexual assault and emotional abuse. Many were outraged that J.Lo would choose to work with him on new music given these allegations—but in an interview with Digital Spy on Tuesday, Trainor explained that Lopez originally had no idea "Ain't Your Mama" was a Dr. Luke-produced track.

"[It was] not fair on her, not at all," Trainor said. "I texted her the song and she had no idea—she thought I did it alone by myself at my house, which a lot of people think because I do do that. I sent it to her and said, 'Do you like the song?' and she said, 'I love the song, my kid loves the song—he's made me play it five times already so I know it's a hit—when can I cut it?', so I said immediately, 'Whenever you want!'"

According to Trainor, she ultimately co-wrote three songs for Lopez's new album, including "Ain't Your Mama," which they chose to debut on American Idol since it mixed well with J.Lo's 1999 banger, "Let's Get Loud."

"But I felt terrible when Jennifer got all the hate for ['Ain't Your Mama'], and it's just all ridiculous. It's such a big song for her," she continued.

Of course, the fact that J.Lo was originally unaware about Dr. Luke's involvement on the track doesn't absolve her of all sin—and it's unlikely that she only found out he produced the track after it became the center of so much controversy. (He's credited as both "Ain't Your Mama"'s co-producer and co-writer.)

But it's hard to say who's to "blame" for this situation. Both Lopez and Trainor have contracts with Epic Records, which is in the same division of Sony Music as Dr. Luke's Kemosabe Records (AKA, the label Kesha is trying to escape). Whether either artist had a choice in working with Dr. Luke is anyone's guess, but it's safe to say that it's yet another eye-opening reminder that artists aren't the only ones who get a say in their work.