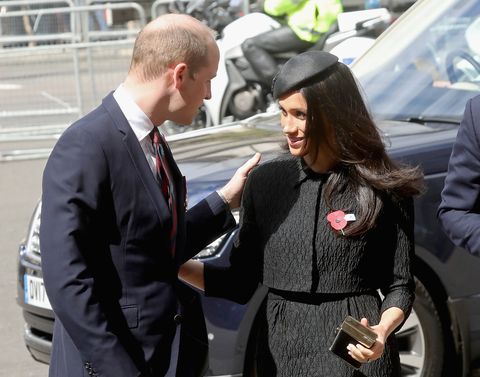 Meghan Markle pulled off a wardrobe change before attending her second Anzac Day event. First, Meghan went for a Carmen Sandiego-esque look at a special service at dawn in Hyde Park, choosing a wide-brim hat and gorgeous jacket.

"Today, on #AnzacDay Prince Harry and Ms. Meghan Markle have paid tribute to Australian and New Zealand servicemen and women at the Dawn Service in London alongside @NZinUK and @AusHouseLondon," Kensington Palace tweeted along with a picture of Harry and Meghan at the dawn service.

Today, on #AnzacDay Prince Harry and Ms. Meghan Markle have paid tribute to Australian and New Zealand servicemen and women at the Dawn Service in London alongside @NZinUK and @AusHouseLondon pic.twitter.com/ewpNibiqtA

Now, she's attending a second commemoration service at Westminster Abbey in a whole new look. This time around, she appears to be channeling Jackie O in a two-piece cropped bespoke suit paired with a matching black fascinator.

The afternoon service also saw Meghan publicly greeting Prince William for the first time since he and wife Kate Middleton welcomed their third child on Monday.

Will and Meghan clearly already have the close, comfortable rapport of family. They sweetly said hello with a kiss on the cheek and a gentle shoulder squeeze (and, presumably, some congratulations from Meghan, and baby prince updates from Will).

Harry, however, seemed too focused on the day's events to get in on the affection.

The royals (and royal-to-be, Meghan) are appearing publicly in honor of Anzac Day, a national day of remembrance in Australia and New Zealand commemorating those lost in war or who sacrificed their lives for their country. The remembrance day has been celebrated in London on April 25 every year since 1916.

Kayleigh Roberts Contributor Kayleigh Roberts is the weekend editor at Marie Claire, covering celebrity and entertainment news, from actual royals like Kate Middleton and Meghan Markle to Hollywood royalty, like Katie Holmes and Chrissy Teigen.
This content is created and maintained by a third party, and imported onto this page to help users provide their email addresses. You may be able to find more information about this and similar content at piano.io
Advertisement - Continue Reading Below
More From The Ultimate Guide to the Royal Family
The Queen's Corgis Are Helping Her With Her Grief
Charles is Looking Forward to Seeing Harry Again
Advertisement - Continue Reading Below
Will & Harry to Walk Together at Philip's Funeral
Prince Charles Addresses Prince Philip's Death
Prince William Pulls Out of 2021 BAFTA Appearances
Prince Philip Said He Had No Desire to Live to 100
The Queen Was by Prince Philip's Side When He Died
Prince Harry Is "Really Upset" Over Philip's Death
Will Harry & Meg Attend Prince Philip's Funeral?
The Queen Is Hopeful Prince Harry Will Return Home