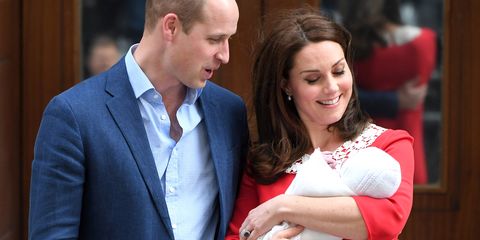 Today, Prince William joined his brother, Prince Harry, and soon-to-be sister-in-law, Meghan Markle, at an Anzac Day service at Westminster Abbey. Just two days ago the Duke of Cambridge and his wife, Kate Middleton, welcomed a new royal baby into the world—and now that very same world is patiently-ish waiting to hear what that new baby will be called.

William, however, was not willing to give any real hints about when the name will be released or what it is. According to a royal reporter, he teased "Alexander," which is Prince George's middle name, and "Jerry," which is one half of delicious ice cream brand Ben & Jerry's, the name of the mouse that torments Tom, and many other humans on the planet, none of whom are ancestors of the royal family.

Prince William was heard making jokes today about possible #royalbabynames including Alexander (George’s middle name) and Jerry. Ok William, you are just playing with us now! Put the world out of its misery! #royalbaby #royalbaby3

The new-again dad also reported that Kate and the baby are "very well" and that they're "in good form, luckily." "Sleeping's going reasonably well so far, so he's behaving himself, which is good news," he said, according to the Daily Mail.

If the Duke and Duchess of Cambridge follow the same protocol they did for Prince George and Princess Charlotte, they'll announce the new baby's name today, two days after his birth. Since Kate Middleton announced she was pregnant, bets have been made about what the name will be: currently, Arthur is the favorite, with two different betting companies, according to The Huffington Post. Also leading contenders: James, Albert, Frederick, Philip.

This content is created and maintained by a third party, and imported onto this page to help users provide their email addresses. You may be able to find more information about this and similar content at piano.io
Advertisement - Continue Reading Below
More From The Ultimate Guide to the Royal Family
Queen's Cousin Accused of Selling Access to Putin
Meghan Wore a Meaningful Necklace for Vax Live
Advertisement - Continue Reading Below
Queen Elizabeth Is Now Selling Beer and Gin
Meghan Markle Wore Carolina Herrera for Vax Live
Princess Charlotte, 6, Tells Everyone She's 16
Meghan Wears Cartier Tank Watch for Vax Live
Meghan Discussed Her Daughter in Vax Live Speech
Prince Harry Talks Digital Pandemic at Vax Live
Harry and Will Have Been Arguing for Months Now
Prince Harry Doesn't Regret His Oprah Interview