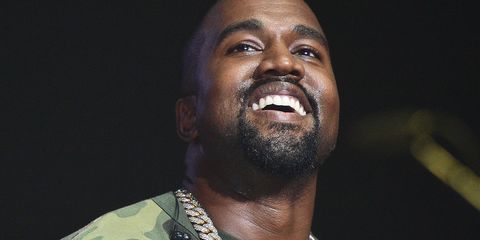 Kanye West has taken a break from his regularly scheduled ranting to post a truly sweet tweet: A picture of his son, Saint, giving his youngest daughter, Chicago, a kiss on the head.

"We got love," West captioned the loving photo.

Saint, 2, is kind of obsessed with his 3-month-old baby sister. Just last month, Kim Kardashian shared her own precious photo of Saint giving Chicago a sweet kiss on the nose.

He loves her so much

"He loves her so much," Kim captioned the picture.

During her recent appearance on The Ellen Degeneres Show, Kim gushed about Saint and Chicago's relationship.

"He loves his little sister. He’s so sweet with her," she said. "I always have to watch out for him—he smothers her, and he has this really big hair so he just jumps in her crib."

North isn't as excited for her youngest sibling as Saint is, but Kim says she is improving her big sister game—apparently she had trouble adjusting to not being an only child when Saint was born.

"She’s better than she was with Saint," Kim said, adding that North still has some issues to overcome in the sharing department, but that she's getting better.

Last week, Kim shared a picture of the whole Kardashian-West family together on a plane (private, of course), captioned, "Party of 5."

The reality star and mother of three has previously lamented just how difficult it can be to get a great picture of her growing family.

I don’t think you really understand how hard it is to take a good family pic. This was all we got before all three kids started crying. I think I cried too

"I don’t think you really understand how hard it is to take a good family pic. This was all we got before all three kids started crying. I think I cried too," she wrote with a picture posted on April 4.