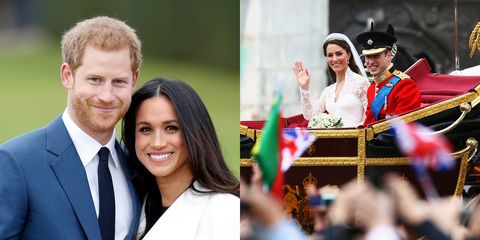 With the royal wedding less than three weeks away, Prince Harry and Meghan Markle are finalizing the details for their big day. Today, Kensington Palace announced the carriage the couple chose for their procession through Windsor town immediately following the ceremony: the Ascot Landau. The wedding procession is the first time the public will get a glimpse at the lovebirds as husband and wife.

Prince Harry and Ms. Meghan Markle have selected the Ascot Landau carriage for their procession through Windsor Town after their wedding on May 19th. pic.twitter.com/uR9bKgqmiX

"The carriage is one of five Ascot Landaus in the Royal Mews. The carriages are used in official and ceremonial state events, such as Coronations, Royal Weddings and State Visits," Kensington Palace wrote on Twitter. "There will be one horse-drawn carriage in the Carriage Procession from St. George's Chapel, which will take the newly married couple through Windsor Town returning to Windsor Castle along the Long Walk."

Take a closer look at the couple's wedding carriage:

Kensington Palace also shared exactly which horses will pull the carriage, which is kind of adorable. "Storm and Tyrone, father and son, are two of the Windsor Grey Horses who will pull the Ascot Landau carriage on the wedding day," the palace tweeted.

Storm and Tyrone, father and son, are two of the Windsor Grey Horses who will pull the Ascot Landau carriage on the wedding day. pic.twitter.com/d8JwbBA6UV

The carriage choice marks another departure from tradition for Harry and Meghan, who opted not to use the same carriage that both Prince William and Kate Middleton and Prince Charles and Princess Diana rode in on their wedding days.

Both Will and Kate and Charles and Diana made their first rides as married couples in an open-topped State Landau.

Getty Images
Related Stories
Everyone Who Has Visited the New Royal Baby
You Can Buy a Coin with Harry and Meghan's Faces
Kayleigh Roberts Contributor Kayleigh Roberts is the weekend editor at Marie Claire, covering celebrity and entertainment news, from actual royals like Kate Middleton and Meghan Markle to Hollywood royalty, like Katie Holmes and Chrissy Teigen.
This content is created and maintained by a third party, and imported onto this page to help users provide their email addresses. You may be able to find more information about this and similar content at piano.io
Advertisement - Continue Reading Below
More From The Ultimate Guide to the Royal Family
See the Royals Socialize at a 1991 Cocktail Party
Eugenie Posts Pics from Harry & Meghan's Home
Advertisement - Continue Reading Below
Queen Trolled Tourists Who Didn't Recognize Her
Charles Expertly Ignored Boris Johnson's Snafu
How Kitty Spencer's Wedding Dress Honored Diana
Will & Kate Are Nervous About George's Future
George Won't Be Forced to Go to Boarding School
A Slice of Diana's Actual Wedding Cake Is For Sale
This Old Video of the Queen Saying "Nah" Is LOL
Diana Had a Secret Message on Her Wedding Shoes