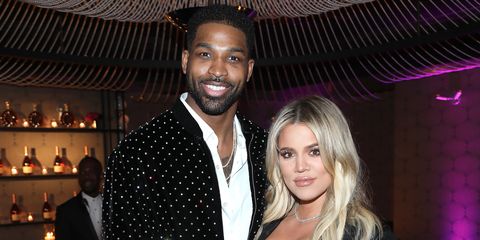 Khloé Kardashian and Tristan Thompson's future as a couple is still unclear, but the new parents stepped out together on Friday for the first time since allegations of Thompson's infidelity broke in April.

They were spotted at TownHall restaurant in Cleveland, laughing and chatting with friends. TMZ obtained footage of the lunch date, which does show Khloé and Tristan sitting side-by-side during the meal.

Fans in Cleveland also noticed the famous couple at the local restaurant, and shared pictures of their own on Instagram.

In April, just days before Khloé gave birth to baby True, allegations spread that Thompson had cheated on her multiple times during her pregnancy. While the Kardashian-Jenner family rushed to her side after the scandal broke, they are reportedly not thrilled that she's still in Cleveland, presumably trying to work things out with Thompson.

Kim Kardashian has been the most vocal member of the family when it comes to her feelings about the situation. In a recent interview with Ellen DeGeneres, the reality star got incredibly candid when asked about the scandal.

While Khloé has yet to address the scandal directly, sources close to the new mom have offered conflicting reports of her plans in the wake of the scandal. While some have suggested she's preparing for a move back to Los Angeles with True, others insist she's still open to working things out with Tristan. Only time will tell.

Kayleigh Roberts Contributor Kayleigh Roberts is the weekend editor at Marie Claire, covering celebrity and entertainment news, from actual royals like Kate Middleton and Meghan Markle to Hollywood royalty, like Katie Holmes and Chrissy Teigen.
This content is created and maintained by a third party, and imported onto this page to help users provide their email addresses. You may be able to find more information about this and similar content at piano.io
Advertisement - Continue Reading Below
More From Celebrity
What Happens on Katie's Season?
Ben Affleck Had Dinner With J.Lo and Her Kids
Advertisement - Continue Reading Below
Jessica Biel Talked "Secret COVID Baby" Phineas
Katie Holmes Paired Baggy Jeans With a White Tank
Why Rachel McAdams Turned Down 'Devil Wears Prada'
Did the Queen's Brooch Send a Message?
Jennifer Lopez and Ben Affleck: Everything We Know
A Look Back at Gwen Stefani & Blake Shelton's Love
Beyoncé Celebrates Twins Rumi and Sir Turning 4
Katie Nails Casual Cool in Jeans, Tee, and Loafers