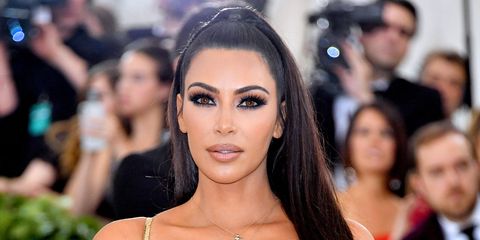 Kim Kardashian has a new signature fashion piece: Faux fur. The reality star made the announcement on Instagram, alongside a photo of her in Vegas, dressed up for a Cher concert.

Kim wore the Cher-inspired look for a Vegas trip with some of her high school friends after reconnecting with her old group at their 20-year high school reunion in April. Kim was joined by several friends from Marymount High School in Los Angeles and documented the trip on Instagram, naturally.

The outfit in the faux fur photo was actually Kim's second Cher look of the night:

Kim isn't a stranger to furry fashion, of course. Here she is back in 2006, rocking a (presumably) faux fur shawl:

Kim took a couple of years off from the look until 2010, when she reclaimed fur-inspired fashion with a vengeance.

She channeled Old Hollywood glamour while accessorizing with fur at a 2013 Academy Awards viewing party.

And honestly, she's been wearing fur—though faux or not is hard to say for sure—pretty much every year since.

So, yeah, the point is the faux fur look might not be Kim's "new" thing, but it's definitely her thing.