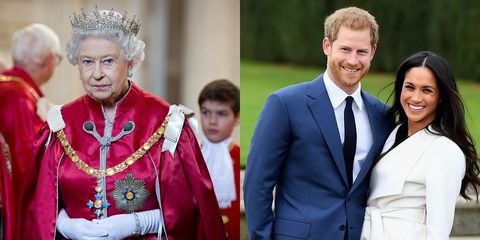 Prince Harry and Meghan Markle announced their engagement last November, but, because Harry is a royal, simply wanting to get married was not enough—the couple also needed the official approval of Queen Elizabeth II before they could tie the knot.

Now, less than a week before their wedding, the finally have all the royal paperwork in place. This weekend, Buckingham Palace shared an image of the Instrument of Consent, the hand-written document which records The Queen's official approval of the marriage.

The Instrument of Consent is drafted by the Crown Office. It's hand-written by an artist who is on retainer with the Crown Office (they actually have a panel of them to choose from).

What is the Instrument of Consent?

The Instrument of Consent is the official, physical document that grants permission for royals to get married. Prince William and Kate Middleton needed on before their wedding in 2011, too.

Why does the Instrument of Consent matter?

The royal family has a lot of traditions, but this one is actually the law. According to the Royal Marriages Act 1772, the Queen must sign this official notice to recognize the marriage of any descendants of George II. The Royal Marriages Act was overturned by the Succession to the Crown Act 2013, but even under the new law, the first six people in line for the throne need the monarch's consent to marry (Harry is currently sixth in line, just making the cut).

Is the Instrument of Consent always the same?

No. They're customized for the couple. Harry and Meghan's, for example, includes a red dragon, which is the heraldic symbol of Wales, as well as the UK's floral emblems–the rose, thistle, and shamrock—and Prince Harry's Label. It also features a rose (the official flower of the United States) and four golden poppies, the state flower of California, where Meghan was born.

Kayleigh Roberts Contributor Kayleigh Roberts is the weekend editor at Marie Claire, covering celebrity and entertainment news, from actual royals like Kate Middleton and Meghan Markle to Hollywood royalty, like Katie Holmes and Chrissy Teigen.
This content is created and maintained by a third party, and imported onto this page to help users provide their email addresses. You may be able to find more information about this and similar content at piano.io
Advertisement - Continue Reading Below
More From The Ultimate Guide to the Royal Family
How the Queen Ends Awkwardly-Long Handshakes
The Queen Has a Rule Against Bad Talking Family
Advertisement - Continue Reading Below
The Queen Took a Pic of Philip With Her to Funeral
The Queen's Tolerance Was the Key to Her Marriage
Will & Kate Welcomed Harry Back Into Their Group
Queen Left a Handwritten Note on Philip's Coffin
The Queen Said Grief Is the Price We Pay for Love
All of the Photos from Prince Philip's Funeral
The Queen Wore This Brooch to Philip's Funeral
Kate Middleton's Nod to Diana at Philip's Funeral