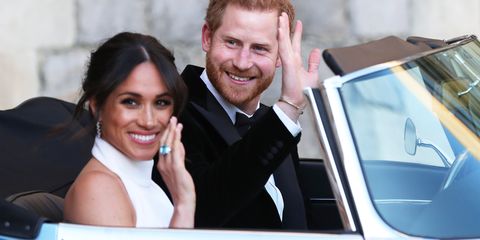 Prince Harry and Meghan Markle married last weekend in a gorgeous ceremony that was broadcast live around the world. While we all tuned in for the wedding itself, the receptions after are still largely a mystery.

Now, Meghan's close friend, Janina Gavankar, has revealed a sweet (and, honestly, pretty hilarious) detail about the reception that only makes us love the couple more (which didn't even seem possible at this point).

In an interview with Town & Country, Gavankar revealed that the new Duke and Duchess of Sussex had quite the sense of humor when it came to labeling the tables at their reception. They apparently named all of the tables after foods that are pronounced differently in the United States and the U.K.

"Potato, potato, tomato, tomato, oregano, oregano," Gavankar said, naming some examples. "It was so sweet. There were so many nods to the beautiful mashup of two cultures."

Gavankar also shared some (admittedly vague) details about Harry's speech at the reception. Meghan's speech made more headlines immediately after the wedding, but Gavankar says Harry's was funny and personal and everything you'd expect at a wedding.

"The speech that Harry gave was so funny, self deprecating, filled with love, and that guy just has her back. I left feeling so solid for them," she said. "I walked away feeling so confident that these two will put their combined power into the world for good. They did it apart. They’ve done it apart their entire lives. Imagine what they can do together."