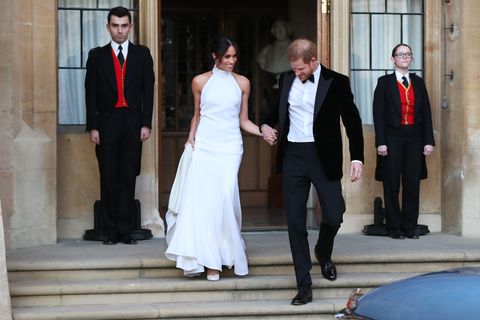 Meghan Markle and Prince Harry's wedding ceremony yesterday was a gorgeous, sweet, and public affair, with the events at St. George's Chapel televised for the entire world to watch—their evening reception, on the other hand, was a much more private and secretive todo.

Following the ceremony and a lunchtime reception (where Elton John reportedly performed a rendition of "Circle of Life" from The Lion King, which, incredible), Harry and Meghan changed into party attire—a tux for him, a tremendous bespoke Stella McCartney gown for her—and headed to their nighttime party in a fancy Jaguar.

Here, the best details, news, and gossip from the party:

When he was asked how he felt about his brother choosing him to be best man, Prince William stated, "It feels great, a real delight ... revenge is sweet," so, it was to be expected that there'd be some good old fashioned brotherly jabs in Will's toast. (Harry also joked to reporters that he'd got down on one knee to ask his brother to be best man, so...)

Meghan Also Gave a Speech Directed at the Royal Family

Breaking with royal tradition, the bride spoke at the reception. Meghan gave a special "thanks" to her new in-laws for welcoming her into the family.

The Newlyweds First Dance Was to Whitney Houston

Proving that they're the best couple ever, Meghan and Harry chose Whitney Houston's "I Wanna Dance With Somebody (Who Loves Me)" as the song for their first dance, The Telegraph reports.

The Cocktails Were Harry and Meghan-themed

A source tells The Daily Mail that the couple served "When Harry Met Meghan" cocktails that were ginger and rum, "as a cheeky nod to Harry's red hair."

The sit-down dinner which lasted from 7:30 to around 10pm was all organic, sourced at the request of Prince Charles, Daily Mail reports, and the canapes were themed 'spring meets summer'.

There Were Midnight Snacks

Like any good wedding that goes a full 12 hours, there were late-night snacks served to keep partygoers going. Candyfloss and 'dirty burgers' were doled out as midnight snacks, which, yum.

While the early festivities included around 600 guests, only a select few 200 people got invites for the nighttime party, which was hosted by the Prince of Wales. Sarah Ferguson was earlier reported to be one of the guests who did not make the cut for the evening event because of her history with her former brother-in-law, Prince Charles. She did, however, come to the ceremony at St. George's Chapel where she sat in the Quire on the opposite side of the Queen. But hey, she wasn't invited to Prince William and Kate Middleton's wedding at all, so...

And They Wore Completely Different Outfits

While the dress code for daytime was day dresses and hats, the evening festivities called for something a little more, well, festive—and fancy. Celebs like Priyanka Chopra, Serena Williams, and Meghan's best friend Jessica Mulroney changed into red carpet-worthy gowns for the party.

And Serena Williams even switched to sneakers under her Valentino gown!

James Corden apparently didn't take a break from his late-night hosting duties last night and took on the role of entertainer and host for the evening at Frogmore House.

"Can anyone play the piano?" Harry reportedly quipped before Sir Elton John performed a few of his hits. "Your Song," "Tiny Dancer," "Circle Of Life," and "I'm Still Standing," were reportedly all among the songs the royal wedding guests were treated to yesterday.

There Was a Fireworks Display

According to The Telegraph, fireworks were set off above Windsor Castle around 11pm last night.

There Was an After-After Party

According to The Daily Mail, many guests traveled back to London after the Windsor festivities ended last night to continue the party at one of Harry's favorite spots, Chiltern Firehouse in Marylebone.


Sally Holmes Editor in Chief Sally is the Editor in Chief of Marie Claire where she oversees coverage of all the things the Marie Claire reader wants to know about, including politics, beauty, fashion, and celebs.
This content is created and maintained by a third party, and imported onto this page to help users provide their email addresses. You may be able to find more information about this and similar content at piano.io
Advertisement - Continue Reading Below
More From Meghan Markle and Prince Harry's Royal Wedding
Meghan Markle Broke Tradition With Wedding Speech
I Tested Meghan Markle's Top Beauty Products
Advertisement - Continue Reading Below
Relive Harry and Meghan's Spectacular Wedding Day
Archie's Birth Certificate Reveals New Royal Tea
Meghan and Harry's Wedding Photographer Details
Meghan Markle Curated the Royal Wedding Playlist
Harry and Meghan Act as Museum Tour Guides
An Obsessive Timeline of Harry and Meghan
Harry and Meghan Took One Risk With Their Wedding
Meghan Markle's Hidden Wedding Tribute to Harry