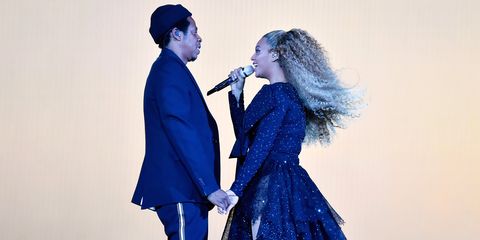 Update 6/7: According to a statement given to Buzzfeed yesterday evening, the twins debuted at the opening night of Beyoncé and Jay Z’s On the Run II Tour were not Rumi and Sir Carter. In a move that really only Beyoncé could pull off, it appears that the couple posed with a pair of decoy twins that look roughly the same age as their own. Considering this is only the beginning of the tour, we’re excited to see what other tricks they have up their sleeves—crossing our fingers that we’ll get to see a ~real~ glimpse of the Carter twins soon.

Original story 6/6: We've been waiting for the second official photo of Beyoncé and Jay Z's twins for so long, I almost gave up hope of ever seeing the Carters (a.k.a. America's royal family) in full. But the time has finally come: The duo kicked off their joint On the Run II Tour today, and blessed fans with the first-ever official photos of Rumi and Sir since their birth.

The #OTR show has begun!

According to The Shade Room, Beyoncé and Jay Z's first stop in Cardiff, Wales was topped off with two insane photos of the twins, accompanied by text reading, "Love Is Universal." Rethinking your decision to not hop on a plane for the tour's opening night? Same.

To recap: After completely breaking the internet with her pregnancy announcement, Beyoncé gave birth to Rumi and Sir Carter last June and the couple has done a class-act job at keeping them well-hidden from the public, other than the singer's epic Instagram shot shortly after their birth. Although Blue Ivy, the couple's oldest daughter, accompanied her parents to the 2018 Grammy Awards (and promptly became the year's best meme), Rumi and Sir have been kept out of the spotlight until now.

Whether or not this is the start of Rumi and Sir's time in the limelight remains—but here's praying we get to see more of these ridiculously cute children in the near future.

Related Stories
Beyoncé and Blue Ivy on a Mother-Daughter Date
Beyoncé and Jay-Z Confirm 'On the Run II' Tour
Ruby Buddemeyer Beauty Editor Ruby is the beauty editor at Cosmopolitan, where she covers beauty across print and digital.
Advertisement - Continue Reading Below
More From Celebrity
36 Celebrity Couples Who Love Some PDA
Ben Affleck Is Blond Now
Advertisement - Continue Reading Below
A Timeline of Charles and Diana's Relationship
Kendall Jenner Wants to Work for Beyoncé
Harry & Jon Bon Jovi Sing Together at Royal Event
Khloé Kardashian Is Being Trolled Over Febreze
A 'Friends' Reunion Special Is Coming to HBO Max
Katie Holmes Is in Head-to-Toe Chloé at Their Show
Ariel Winter Now Has Strawberry Blonde Hair
46 Stars Who Dated Before They Were Famous