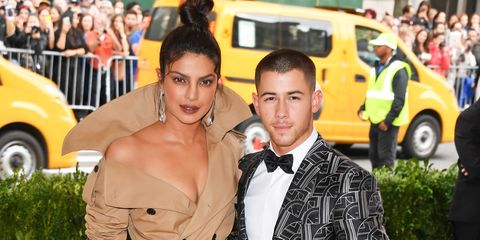 Remember when Priyanka Chopra and Nick Jonas showed up to the 2017 Met Gala together, looking like a couple, but claiming they were just there as friends? Well, now, one year later, the Quantico star and singer are reportedly a Thing for real.

“They are dating and it’s brand new,” a source confirmed with Us Weekly. “It’s a good match and they are both interested in each other.”

The new couple reportedly spent all of Memorial Day Weekend together. First, they went to see Beauty and the Beast Live on Friday, which is magical. “They walked in together just before the performance was starting, they looked great together, but no hand-holding or obvious PDA,” a source who spotted the couple out together said. "The two were seen heading to the concessions stand during intermission before returning to their seats to finish taking in the show. They snuck out right as the show was ending."

On Saturday, fans spotted the two at a Los Angeles Dodgers game together, and later that evening they were seen getting snuggly on Jonas' friend, Glen Powell's boat.

The couple hasn't officially confirmed their relationship. But Chopra is good friends with Meghan Markle (she snagged an invite to the royal wedding and, of course, looked absolutely stunning)—so we can only hope this means there are some epic double dates in their future. Just imagine Prince Harry bobbing about while Nick serenades the group after dinner. Play "Jealous" next, please!

Related Stories
Priyanka Chopra Arrives for the Royal Wedding
Priyanka Chopra Talks Meghan Markle's Wedding
Alex Warner
This content is created and maintained by a third party, and imported onto this page to help users provide their email addresses. You may be able to find more information about this and similar content at piano.io
Advertisement - Continue Reading Below
More From Celebrity
A Slice of Diana's Actual Wedding Cake Is For Sale
Matt Damon Trolled Ben Affleck and Jennifer Lopez
Advertisement - Continue Reading Below
This Old Video of the Queen Saying "Nah" Is LOL
Diana Had a Secret Message on Her Wedding Shoes
Will's Friends Made "Jibes" About Kate's Mom
William Will Suffer "Worst" from Harry's Memoir
Simone's Boyfriend Sent Her the Sweetest Message
Harry's Friends Don't Want to Be in His Memoir
Will & Kate's Modern Approach to Raising George
Meet Simone Biles's Super Supportive Parents