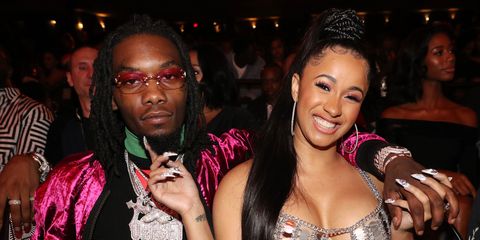 Pack away your fascinator, your best heels and your confetti for another day, because it turns out we all missed the invite to Cardi B’s big day. The rapper has confirmed in a Twitter statement that actually, Cardi B and fiancé Offset got married nine months ago. Surprise!

Speculation that Cardi and baby daddy Offset may have tied the knot first began when TMZ obtained a marriage license, which seemed to prove that the couple had made it official WAY back in September.

Earlier this week at the BET Awards, Offset also thanked “this wife” as he and group Migos took to the stage to accept an award, so that should probably have been all the proof we needed.

With everyone well and truly shook by the secret nuptials, heavily pregnant Cardi headed over to Twitter to speak directly to fans, and explain why the couple had decided to keep things to themselves in the most Cardi B way possible.

This why i name my album “Invasion of privacy” cause people will do the most to be nosey about your life .Welp fuck it . pic.twitter.com/U3uHFOT3qK

“One morning in September we woke up and decided to get married. We found someone to marry us, and she did, just the two of us and my cousin,” she wrote in a notes post.

“I said I do, with no dress no makeup and no ring! Well now since you lil nosey fucks know at least ya can stop saying I had a baby out of wedlock.”

With all that in mind, it now kinda looks like that very public, on-stage proposal in October was just one big farse. They would have in fact already been married at that point, so these two have basically just played us all for fools. Nice work.

Lucy Wood Contributor, MarieClaire.com Lucy Wood spends most of her time writing about celebby things, reading books, and waiting for the glorious day that she have enough millions for a pet sloth.
This content is created and maintained by a third party, and imported onto this page to help users provide their email addresses. You may be able to find more information about this and similar content at piano.io
Advertisement - Continue Reading Below
More From Celebrity
Kaavia Talks to a Bee in an Adorable IG Video
David Harbour on Being Stepdad to Lily Allen's Kid
Advertisement - Continue Reading Below
Ben Affleck Is "Getting to Know" J.Lo's Kids
Salma Hayek's Owl Had a Mishap With Harry Styles
Princess Diana Always Dreamed in Living in Cali
Angelina Jolie Was Spotted Leaving Her Ex's Place
What Happens on Katie's Season?
Ben Affleck Had Dinner With J.Lo and Her Kids
Jessica Biel Talked "Secret COVID Baby" Phineas
Katie Holmes Paired Baggy Jeans With a White Tank