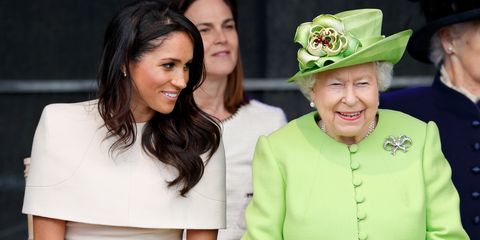 The heartwarming photos of inside jokes and shared giggles have already told us everything we needed to know, so it's no surprise to hear that Duchess of Sussex, Meghan Markle, has reportedly struck up a ‘close, warm relationship’ with Queen Elizabeth II.

The unlikely but adorable BFFs have become increasingly good friends after the actress married Prince Harry back in May, before accompanying his grandmother to three major public events as a member of the royal family.

Earning the approval of your new family-in-law is always daunting (let alone when it's the actual Queen of England), but sources have claimed that Meghan is already “completely at ease with the queen.”

It’s thought that we can all expect to see a lot more of Meghan and her stunning royal wardrobe, having “impressed” the Queen and her new family at all royal engagements so far with her desire to become involved in various important outreach programmes.

The source went on to claim that Meghan has been secretly meeting with charities to make as much positive impact as possible in her new role.

“Gender equality, girls education, gay rights and human rights, which were the focus of her work as a UN advocate and a representative for the One World Foundation, will be themes to be prominently featured in her future work,” they added.

Name a more iconic duo than these two.