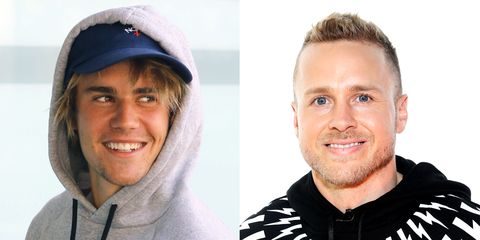 In today's edition of What The Hell Is Going On With 2018, Spencer Pratt and Justin Bieber apparently... hung out after one of Bieber's concerts. Spencer Pratt, a.k.a. Pratt Daddy—as he proudly stated via a tie-dye and diamanté studded tee—posted on his Instagram page the photo of the two together, writing, "GAME OVER."

There's a lot going on here. First, let's start with the obvious: Spencer Pratt, crystal connoisseur and reality TV villain, who reliably pops up on some poorly related show every couple of years, is hanging out with Justin Bieber. Don't get me wrong, Bieber has had his moments—but thanks to a couple of catchy hits and a much-needed image makeover, he's officially a superstar once more.

To make things even more weird, here's Pratt's description of what went down, courtesy of People Style:

“All of a sudden the door pops open and glowing like a dang heavenly angel is Bieber ... I instantly threw up my phone and start snapping him like, ‘I love you JB!’ The whole clique I was with had no idea it was him because of his new style and facial hair and his long hair, but I knew because obviously I follow him on all platforms.”

I... I don't even know what to say. Except that an angel would probably not wear that alarmingly bright Hawaiian-style shirt, let alone that bandanna. Also, an angel would not have that horrendous a handlebar moustache. Or any moustache, most likely.

Also, check out that necklace. Pratt is wearing a crystal. A legit crystal. Because of course he is. This is Pratt Daddy, after all. 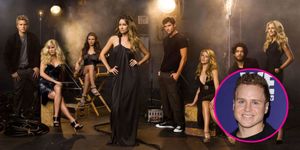 7 Truth Bombs Spencer Dropped About 'The Hills'
This content is created and maintained by a third party, and imported onto this page to help users provide their email addresses. You may be able to find more information about this and similar content at piano.io
Advertisement - Continue Reading Below
More From Celebrity
Marvelous Women Scarlett Johansson & Florence Pugh
Ashley Graham Opened Up About Sex After Childbirth
Advertisement - Continue Reading Below
Brad Pitt and Nicole Poturalski Have Broken Up
Chrissy Teigen Shared a Sweet Video With Luna
EmRata Displayed Her Bump in an Open Button-Down
Harry Sent a Legal Warning Over "False" Article
Chrissy Teigen Talked About Her Baby Loss Photos
Chrissy Teigen Opens Up About Her Loss
A Look Back at Gwen Stefani & Blake Shelton's Love
Serena Williams Shows Off Toned Body In BTS Photos