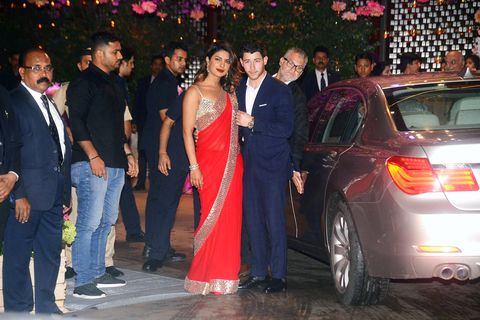 With an appearance at an engagement party Thursday in Mumbai, Nick Jonas and Priyanka Chopra continue their love tour o India. The party was for Akash Ambani, the son of an Indian billionaire, TMZ reports. Priyanka stunned in a red sari for the party, while Nick wore a sharp blue suit.

Nick and Priyanka have been spending a lot of time together lately. In fact, they've been practically inseparable since Memorial Day weekend, when they were spotted all around Los Angeles, where they reportedly attended a Beauty and the Beast live concert at the Hollywood Bowl on Friday and a Los Angeles Dodgers game on Saturday.

After their Memorial Day lovefest, the couple traveled to New Jersey to attend the wedding of one of Nick's cousins.

"It’s a huge deal that Nick brought Priyanka to his cousin’s wedding," a source close to the couple told People. "He’s dated a lot over the last couple years but it’s never been anything serious, so this is a big step."

During their trip to India, the couple seemed to (finally) go Instagram official, each posting heart eye emoji-bedazzled pictures and videos of each other to their respective Instagram Stories. You know, a sure sign that things are getting serious.

They've been in India for a while now, including time in Goa where Nick was introduced to Chopra’s mother, Madhu. Priyanka's mom apparently told India's DNA that it was still "too early to form an opinion" on her daughter’s new love interest. Awkward.

Kayleigh Roberts Contributor Kayleigh Roberts is the weekend editor at Marie Claire, covering celebrity and entertainment news, from actual royals like Kate Middleton and Meghan Markle to Hollywood royalty, like Katie Holmes and Chrissy Teigen.
This content is created and maintained by a third party, and imported onto this page to help users provide their email addresses. You may be able to find more information about this and similar content at piano.io
Advertisement - Continue Reading Below
More From Celebrity
Chloe From 'Too Hot to Handle' Is in 'The Circle'
Comparing the Two Biggest Royal Weddings
Advertisement - Continue Reading Below
Kate, George, and Charlotte Were Seen Shopping
J.Lo Shares First IG Photo Post A-Rod Split
Harry Has Experienced "Frostiness" from Royals
Billie Eilish Just Debuted a Bouncy Blonde Blowout
Gigi Shared an Adorable Spring Selfie With Khai
Katie Holmes Posted a 15th Bday Tribute to Suri
Chrissy Teigen Talked Stigma Around Infertility
Beyoncé Stuns in a Mesh Dress With Matching Gloves