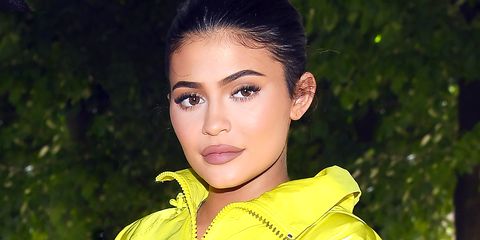 As celebrity secrets go, Kylie Jenner's pregnancy was simultaneously one of the best and worst kept in history. Best in that everyone close to the Kardashian-Jenner family fervently and stubbornly refused to officially comment on the rumors. Worst in that everyone in the world knew Kylie was pregnant for months and months in spite of the KarJenner vow of silence.

Once Stormi Webster was born though, Kylie was excited to share her journey of motherhood with the world—for a while, anyway. Although Kylie was generous with her Stormi-filled social media posts at first, the Kylie Cosmetics mogul changed her mind last month. In June, Kylie deleted all pictures of Stormi from Instagram (or at least all of the pictures that showed her daughter's face).

About three weeks later, Kylie has decided that she's ready to share Stormi with the world again—but still not on Instagram. The star posted two adorable pictures of Stormi on her Snapchat this weekend.

The first, filtered in bright pink, shows Stormi cuddling on Kylie's chest and is captioned, "Nothing better."

The other, captioned, "My little love," shows Stormi lounging in bed.

Neither picture gives a great look at Stormi's face, of course, which might be a hint that Kylie is still hesitant to share full pictures of her daughter with the people of the internet.

Kylie's decision to withhold pictures of Stormi from the public came to light on June 10, when Kylie posted a picture of herself and Stormi that had most of Stormi's face cropped out. When a fan pointed out the crop, Kylie replied, "Yeah I cut my baby out. I'm not sharing photos of my girl right now."

View On Instagram
Kayleigh Roberts Contributor Kayleigh Roberts is the weekend editor at Marie Claire, covering celebrity and entertainment news, from actual royals like Kate Middleton and Meghan Markle to Hollywood royalty, like Katie Holmes and Chrissy Teigen.
This content is created and maintained by a third party, and imported onto this page to help users provide their email addresses. You may be able to find more information about this and similar content at piano.io
Advertisement - Continue Reading Below
More From Celebrity
Ariana Grande Got Married Over the Weekend
Ariana Grande Quietly Married Dalton Gomez
Advertisement - Continue Reading Below
Joie de Tracee
Jennifer Lopez and Ben Affleck: Everything We Know
Harry & Oprah's Mental Health Doc Has a Title
Serena Williams Might Miss the Tokyo Olympics
Jennifer and Ben Have "Unreal" Chemistry Together
The Sussexes Marked Archie's Bday in a Lovely Way
Queen's Cousin Accused of Selling Access to Putin
Meghan Wore a Meaningful Necklace for Vax Live