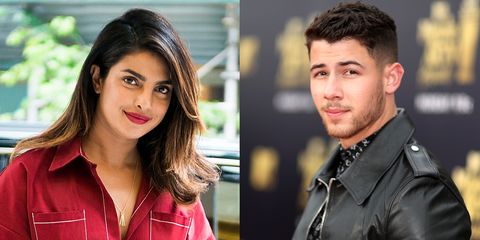 Some particularly eagle-eyed fans think they may have spotted rumored couple Nick Jonas and Priyanka Chopra wearing matching gold bands. But don’t panic, the his-and-hers rings aren’t sitting on the fingers that matter. You probably don’t need to rush out and buy a hat just yet. Right?!

Page Six first noticed that Jonas and Chopra have been rocking the rings publicly, with the first joint jewelry appearance on June 22, and a few sightings on their globetrotting travels ever since. The unconfirmed (but like, come on now) couple spent Fourth of July together in New York City, along with the full Jonas Brothers lineup and Joe’s fiancée, Sophie Turner. Nick was spotted wearing his gold ring on his middle finger, while Priyanka opted her hers the day before on her right hand.

Also: Priyanka just so happened to also share a Boomerang on Instagram stories of a mysterious Cartier jewelry box without revealing the contents. The plot thickens.

If the rings are significant to their relationship, it’s the latest cute step for the couple who’ve been inseparable for weeks on end. So far their major milestones have included family weddings, traveling the world and supporting each other at work.

Of course, it is probably also worth considering the possibility that we’re all completely overreacting, reading way too much into this coincidence and it could mean absolutely nothing that two humans both happen to own a golden ring. Maybe.

But, matching rings or simple coincidence, this whole thing mainly just reminds me of the last time we were talking about the Jonas brothers wearing the rings. Remember the purity rings? What a time to be alive.

Instagram
Lucy Wood Contributor, MarieClaire.com Lucy Wood spends most of her time writing about celebby things, reading books, and waiting for the glorious day that she have enough millions for a pet sloth.
This content is created and maintained by a third party, and imported onto this page to help users provide their email addresses. You may be able to find more information about this and similar content at piano.io
Advertisement - Continue Reading Below
More From Celebrity
Ariana Grande Got Married Over the Weekend
Ariana Grande Quietly Married Dalton Gomez
Advertisement - Continue Reading Below
Joie de Tracee
Jennifer Lopez and Ben Affleck: Everything We Know
Harry & Oprah's Mental Health Doc Has a Title
Serena Williams Might Miss the Tokyo Olympics
Jennifer and Ben Have "Unreal" Chemistry Together
The Sussexes Marked Archie's Bday in a Lovely Way
Queen's Cousin Accused of Selling Access to Putin
Meghan Wore a Meaningful Necklace for Vax Live