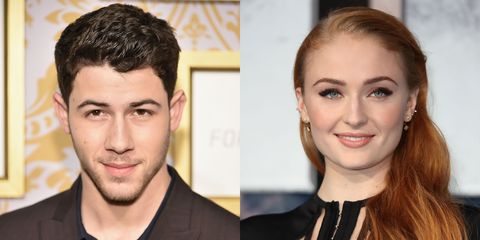 Nick Jonas just confirmed that Sophie Turner, who is engaged to his older brother, Joe, is already like part of the family.

"I’m very excited," the actor and singer told Fox News of his brother's engagement. "I think Sophie is an incredible addition to our family. She’s like a sister to me already. I don’t have any details about the wedding for you, but I’m sure those will be out soon."

Nick hung out with Joe and Sophie at the Met Gala in May and posted this adorable picture of his brother and future sister-in-law.

Nick also revealed that Sophie is very tight-lipped when it comes to Game of Thrones spoilers—but he did imply that his brother is in on what happens on the hit show.

"She has not," Nick said when asked if Sophie had shared any Game of Thrones secrets with him. "She’s very good about her confidentiality agreement. So is [my brother]. He’s not allowed to say anything either. But also, I don’t really want it to be spoiled. I’m kind of a fan seeing it as it happens."

Nick, of course, appears to have a new lady in his life as well. He's been spotted out and about with actress Priyanka Chopra on several occasions since Memorial Day.

The couple shared some PDA out at dinner in Los Angeles and were later spotted traveling together at JFK airport in New York City. Earlier this week, reports broke that they had traveled to New York together to attend Nick's cousin's wedding, which means things are getting serious.