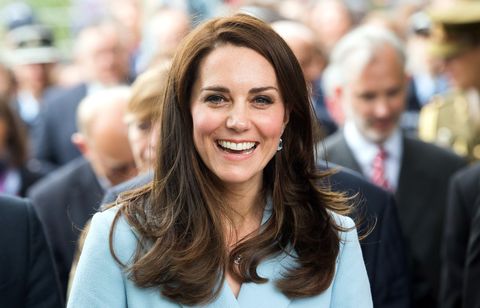 Tomorrow, on July 9, Prince Louis will be christened at The Chapel Royal, St. James’s Palace, London. In honor of the big day, let's take a look back at Kate Middleton's christening, which took place on June 20, 1982 (just a day before Prince William was born).

A Twitter user started circulating a series of intimate Middleton family photos from Kate's special day. The pictures show a baby Kate in a flowing, white christening gown, being doted on by pretty much every member of her family.

In the adorable photos, it's clear to see that Kate's eyes look exactly the same today as they did when she was an infant. Baby Kate also a bears striking resemblance to her oldest son, Prince George, who has become known for making the most adorable pouty faces in public.

To jog your memory, here are a just a few of George's adorable public pouts over the years, from the fairly recent:

To the adorable toddler pout:

To the chubby cheeked baby frown:

Now, for comparison, take a look at Kate's perfect pout in the first picture. The future Duchess of Cambridge is the spitting image of her oldest child (or, you know, technically, the other way around).

We are 6 days away from Prince Louis’ and to celebrate that let’s look at The Duchess of Cambridge’s christening back on June 20th, 2018 (exactly a day before her future husband was born)! pic.twitter.com/5UgNqCofbP

Prince Louis will be christened by The Archbishop of Canterbury, the Most Reverend Justin Welby, according to a release from Kensington Palace.

Prince Louis was born on April 23 and weighed in at 8 pounds and 7 ounces. His full name is Louis Arthur Charles, a nod to his grandfather, Prince Charles.