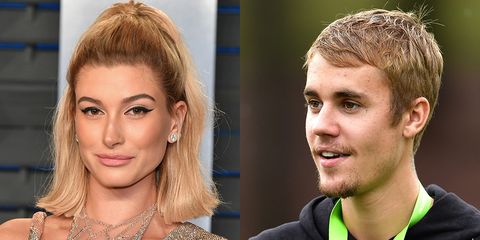 The cute Instagram posts and giant diamond sparkler are all very well and good, but it turns out there’s still one, very important deal breaker to be discussed before Hailey Baldwin will head down the aisle with new fiancé, Justin Bieber.

News of their surprise engagement in the Bahamas broke worldwide earlier this week, but the model has still made it clear she will only marry her sweetheart on one condition—that he never brings back that goddamn awful mustache for as long as he lives. Fair.

Hailey was spotted expressing her heartfelt disdain for Justin’s facial hair in an Instagram response on Monday, when TV producer Ryan Good left a comment on Biebs’ sweet and sentimental photo, (hopefully) joking: “Grow the mustache back for the wedding.”

Not if Hailey has anything to do with it, and now the singer's recent clean shaven, baby-faced look all makes a lot more sense. Replying to Good, she emphatically stated: “Don’t u dare give him that idea you lunatic.” Her passion on the subject kind of understandable when you realize the groundwork that Hailey has been putting in to get rid of that facial hair.

Fans learned earlier this week that she was single-handedly responsible for the recent demise of the creepy mustache. Beliebers who met Justin in New York City tweeted: “We were all excited he shaved his mustache and he said ‘yeah Hailey made me shave it off, well not made me but you know haha’.”

We were all excited he shaved his mustache and he said “yeah Hailey made me shave it off, well not made me but you know haha” he’s so cute and funny and looked so happy I love him so much

And when you're served a reminder of what the ‘tache once looked like in its heyday, you soon realize that Hailey Baldwin is merely doing God’s work with this one. Next on the list, maybe a haircut?

Your a beautiful person Posty! Truly an honor to know you my brother!