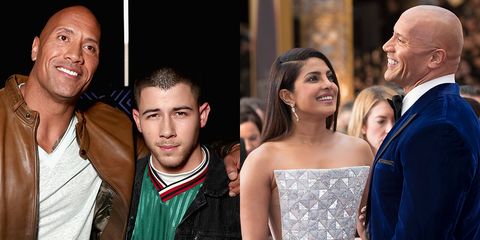 If anyone was to look particularly great in nothing but a golden crown of leaves, a giant diaper, and accessorized with an elegant bow and arrow, it’s got to be The Rock. So that explains why he claims to have been playing Cupid in Nick Jonas and Priyanka Chopra’s new relationship.

Dwayne Johnson is taking full responsibility for the blossoming romance and wants all the credit for matchmaking the pair, apparently through his recent movie roles with both Jonas and Chopra.

It’s still yet to be revealed how the actress and singer first came to meet one another before they began dating back in May, but Johnson is fairly sure that it’s all down to him. After all, The Rock appeared alongside Priyanka in the remake of Baywatch in 2017, while he and Nick worked together on the Jumanji reboot later that year. That settles it, then. Their first flirtation MUST have been a chat about how much they love Dwayne Johnson.

When asked by Entertainment Tonight about the new couple, Johnson tactfully responded: “Are they happy?” before committing to his involvement in the romance. Having heard that they’re more than happy right now, he added: “Well then, I take credit. Baywatch and Jumanji. I did it, yes. If they’re happy.”

Rock or no Rock, Nick and Chopra have seemingly gotten more solid in their relationship since first meeting. What started out as cute, understated dates to see Beauty and the Beast has now become traveling the world and wearing matching gold bands.

So there you have it—definitive proof that The Rock is the common denominator for all good things in life. 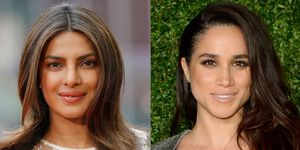 Priyanka Chopra on "Sexist" Meghan Markle Story
Lucy Wood Contributor, MarieClaire.com Lucy Wood spends most of her time writing about celebby things, reading books, and waiting for the glorious day that she have enough millions for a pet sloth.
This content is created and maintained by a third party, and imported onto this page to help users provide their email addresses. You may be able to find more information about this and similar content at piano.io
Advertisement - Continue Reading Below
More From Celebrity
Royal Family Shares Rare Photo of Prince Philip
Chloe From 'Too Hot to Handle' Is in 'The Circle'
Advertisement - Continue Reading Below
There's Drama Over Prince Harry's Funeral Attire
Jennifer's Rep Breaks Silence on Adoption Story
Princess Eugenie's Prince Philip Tribute
Serena Williams Signed a Major TV Deal With Amazon
Chrissy Wrote Luna the Sweetest Birthday Message
Prince Harry Has Met Princess Eugenie's Son August
The Queen Returns to Work After Philip's Death
A Brief History Lesson on Brad and Jen