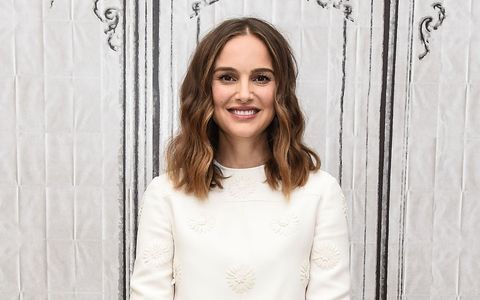 Natalie Portman has added a new gig to her resume and we have Lena Dunham to thank for it...kind of, anyway.

Portman's directorial debut, A Tale of Love and Darkness, is getting all kinds of (well-deserved) buzz. The film, based on Amos Oz's memoir of the same name, focuses on a woman's relationship with her family during the early days of the State of Israel. The subject matter might seem intimidating, but Portman says it was nothing compared to the intimidation she felt as a woman taking the helm of a film as a director.

Hollywood's unfortunate reputation for sexism is well-documented at this point, and sadly persists in 2016. Portman says that Hollywood's tendency to label films directed by established actresses as "vanity projects" made her hesitant to sit in the director's chair, but Lena Dunham's Tiny Furniture inspired her.

"I remember seeing Tiny Furniture, Lena Dunham's film, and when the credits rolled I started crying because it was written by Lena Dunham, starring Lena Dunham, produced by Lena Dunham, and directed by Lena Dunham," Portman told Entertainment Weekly. "This young woman has no fear of [saying] 'I did it, I did all of this.' And it was so good. It inspired me to not be afraid of that [criticism]."

With talented, smart, high-profile women like Portman and Dunham embracing roles as directors and all-around creators, hopefully the sexist notions that hold women back in Hollywood will soon be a thing of the past.

Kayleigh Roberts Kayleigh Roberts is the weekend editor at Cosmo, focused on celebrity news and royals.
This content is created and maintained by a third party, and imported onto this page to help users provide their email addresses. You may be able to find more information about this and similar content at piano.io
Advertisement - Continue Reading Below
More From Celebrity
Mandy Moore Calls Breast Pump Emmy's MVP Accessory
Royal Nanny to Get Damages from Interview Scandal
Advertisement - Continue Reading Below
Prince William and Kate Will Focus on Work in 2022
Kate Middleton Shares Prince Louis's First Words
Prince Charles Shares Final Exchange With Philip
William and Kate's Children Just Love Airplanes
Jennifer Aniston Answered Bizarre Fan Questions
Prince Charles "Really Wants to Meet" Lilibet
Britney Spears Deleted Her Instagram Account
Megan Fox Won't Be Told "What a Woman Should Be"