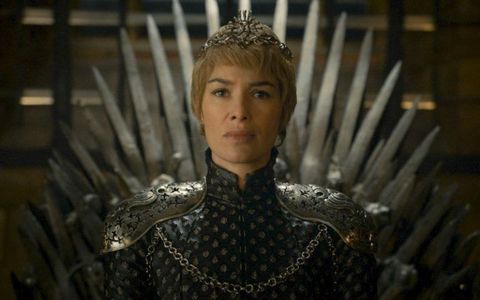 Warning: This post contains spoilers for the Game of Thrones Season 6 finale.

The Game of Thrones finale was just intense all around. The stakes changed drastically for all of the major players, but none experienced quite as much upheaval as Cersei Lannister. In the span of the finale, she blew up half of King's Landing with wildfire, learned that her last remaining son, Tommen, had taken his own life, and took his place on the Iron Throne.

That was all in ONE EPISODE.

But the moment that really left fans with burning questions came at the very end of the finale, when Jaime Lannister returned to King's Landing to see his sister on the throne and they shared a very intense ~look~.

Showrunners David Benioff and D.B. Weiss are usually very tight-lipped about all things related to the future of Game of Thrones, but even they had to talk about that look. They confirmed to Deadline that we weren't reading too much into the intensity of that moment and it will have an impact on Season 7.

"It's definitely a moment where Jaime has to start coming to terms with how drastically and irrevocably everything in his world has changed—political arrangements, his personal life, everything," they explained to Deadline in a joint interview. "He knew his sister was capable of big plays, but this is another level."

And what does that look and everything that led up to it mean for Cersei in Season 7? Potentially a lot, according to Benioff and Weiss.

"Cersei has certainly done a lot of horrible things in her life and she could be a very cruel person, but the one thing that was redemptive about her was she genuinely loved her children," they said. "Now they're all gone, and I think that is very interesting for us. Who is she, without her children? The answer is something you'll find out about next season."

Who is Cersei without her children? It's a question Game of Thrones fans have been asking themselves since the moment Tommen took his fatal leap, and one we can't wait to have answered in Season 7.

Of course, we'll have to wait a lot, since Season 7 of Game of Thrones doesn't premiere on HBO until summer of 2017.

Kayleigh Roberts Kayleigh Roberts is the weekend editor at Marie Claire, covering celebrity and entertainment news, from actual royals like Kate Middleton and Meghan Markle to Hollywood royalty, like Katie Holmes and Chrissy Teigen.
This content is created and maintained by a third party, and imported onto this page to help users provide their email addresses. You may be able to find more information about this and similar content at piano.io
Advertisement - Continue Reading Below
More From Celebrity
Celebs That You Forgot Were on MTV Shows
The Best TV and Movie Wedding Dresses of All Time
Advertisement - Continue Reading Below
47 'Friends' Facts Every Superfan Should Know
40 Celeb Exes Who Worked Together After a Breakup
35 Unforgettable Royal Wedding Scandals
The 50 Most Popular Episodes of ‘Friends,’ Ranked
Iconic Party Photos From the Past