YAS QUEEN is a phrase used by pretty much everyone I know on a day-to-day basis, but YAS QUEEN OF ENGLAND is something I’ve definitely never said myself until this point. That all changes right now, because experts are fairly convinced that everyone’s favorite honorary grandmother Queen Elizabeth II might just have been quietly trolling the President in her own special way, during Trump's visit to London last week.

Trump’s trip already featured a few slightly awkward moments, including the Queen being left to wait for ten minutes on live television for his arrival, and the small matter of nearly 250,000 Londoners marching against the President through the city. So really, it’s only fair that her Majesty may have thrown her own subtle shade towards Trump when greeting him for afternoon tea at Windsor Castle.

The amazing observation comes from Twitter user @SamuraiKnitter, who suspects that the Queen may have actually trolled Trump on not one, but three occasions—each through the perfectly understated and royal means of a brooch. For anyone who doesn’t know, the Queen’s brooches are kind of a big deal and are often significant.

For day one of the visit (when she didn't actually meet with Trump), Queen Elizabeth wore a brooch given to her as a personal gift of friendship by former President and First Lady, Barack and Michelle Obama, which they literally purchased with their own money. It’s like when your friend dumps a great guy for an awful one, and you "accidentally" call the new one by the ex’s name.

The next day, when she met with Trump for tea, Her Majesty swapped that one out for another brooch originally handed down by her mother, who famously wore it to her father's state funeral.

Honestly, choosing a funeral brooch for meeting with Trump is such a MOOD.

And the third brooch on Day Three was another special gift given to the Queen, this time from Canada—Britain’s commonwealth country and ally, but not exactly Trump’s number one pal. (She didn't meet with Trump on that day either, but he remained in the United Kingdom.)

Everyone knows the British love their tea, but THIS is a whole new level. God save the Shade Queen Liz. 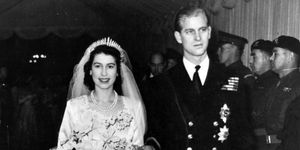 Remembering Queen Elizabeth's Wedding Day
Lucy Wood Contributor, MarieClaire.com Lucy Wood spends most of her time writing about celebby things, reading books, and waiting for the glorious day that she have enough millions for a pet sloth.
This content is created and maintained by a third party, and imported onto this page to help users provide their email addresses. You may be able to find more information about this and similar content at piano.io
Advertisement - Continue Reading Below
More From Celebrity
Diana Had a Secret Message on Her Wedding Shoes
Will's Friends Made "Jibes" About Kate's Mom
Advertisement - Continue Reading Below
William Will Suffer "Worst" from Harry's Memoir
Simone's Boyfriend Sent Her the Sweetest Message
Harry's Friends Don't Want to Be in His Memoir
Will & Kate's Modern Approach to Raising George
Meet Simone Biles's Super Supportive Parents
What Happens on Katie's Season?
Bennifer Recreated Their 2002 PDA Moment
Why Harry's Memoir Release Date Has Upset People