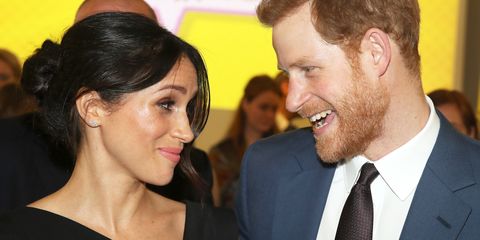 In just a few short months, Prince Harry and Meghan Markle will embark on their royal tour of Australia and New Zealand, and planning for the big trip is already underway. Meghan is gearing up for the October trip by planning out her wardrobe, and she and Harry have reportedly butted heads over one look she hoped to pull during the tour.

Per the Daily Mail: "Harry, who has been sitting in on some of Meghan’s meetings at Kensington Palace with ‘special projects teams’ from various designers, is said to have given the thumbs-down to a masculine Stella McCartney tuxedo suit his wife picked out for a glitzy evening event during the tour."

If Meghan did go with a tux, it wouldn't be the first time she stepped out in a suit with Harry. In February, she wore a chic black and white suit to the Endeavour Fund Awards' Ceremony at Goldsmiths' Hall in London.

The Daily Mail reports that Meghan is struggling with the royal family's strict fashion rules and pushing back, notably with her Wimbledon look this year, which included white culottes and a blue and white striped Ralph Lauren shirt.

As the Daily Mail pointed out, if Meghan did wear a tux during her Australian tour, she would be paying homage to Harry's mother, the late Princess Diana. Diana famously wore a tuxedo to a dog racing event at Wembley Stadium in 1988.

Of course, this is all very speculative, so we'll have to wait until October to find out if Meghan incorporates a tux into her Australian wardrobe.