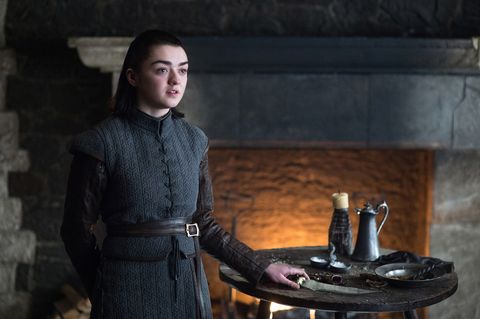 Game of Thrones is not exactly what you'd call family-friendly television. The HBO hit is known for making the most of its premium cable status, including scenes of graphic violence and gratuitous nudity. That's fine for the adults who are the show's target audience, but what about the young actors who started on the series as children?

It was just as awkward as you'd imagine, Maisie Williams (who plays fan favorite Arya Stark on the series) confirmed in a new interview with The Australian. In the profile, Williams admits that her mother, along with costar Sophie Turner's mother (Turner plays Sansa Stark) worried about exposing their young daughters to the sexual content in the show—even in read-throughs.

Per Business Insider: "Williams' and Turner's mothers stopped shielding them from the show's graphic sex and violence early on, when they debated taking the girls out of a read-through of a scene featuring two girls 'going at it' — trying to keep their daughters in the dark only served to pique their interest. 'The sex was just quite ­embarrassing and awkward for us,' Williams says, matter-of-factly."

The "going at it" scene was likely this one, featuring a recurring character, prostitute Ros, and another sex worker auditioning for a gig in Littlefinger's brothel by performing sex acts on each other:

Since Williams was just 12 when she started working on Thrones, it's understandable that her mom would have some concerns about the content of the series—even in scenes she wasn't in.

These days, Williams, now 21, watches the series with her family—including her grandmother, who apparently pre-games the weekly event.

"Bless her," Williams said. "My mum just plies her with more and more gin."

Kayleigh Roberts Contributor Kayleigh Roberts is the weekend editor at Marie Claire, covering celebrity and entertainment news, from actual royals like Kate Middleton and Meghan Markle to Hollywood royalty, like Katie Holmes and Chrissy Teigen.
This content is created and maintained by a third party, and imported onto this page to help users provide their email addresses. You may be able to find more information about this and similar content at piano.io
Advertisement - Continue Reading Below
More From Celebrity
Gabrielle Union Debuted a New, Short Haircut
J.Lo Made Out With Ben on IG for Her 52nd Birthday
Advertisement - Continue Reading Below
Are Will & Kate Sending a Message to Harry & Meg?
Harry and Meghan Reportedly Have a Four-Book Deal
Naomi Osaka Lit the Olympic Cauldron in Tokyo
John Legend Performed "Imagine" for the Olympics
Simone Biles Is Honored With Her Own GOAT Emoji
Kate Winslet Reveals Her Favorite Red Carpet Look
Margot Robbie Had a Life-Size Cutout of John Cena
Jennifer Lopez and Ben Affleck Are IG Official