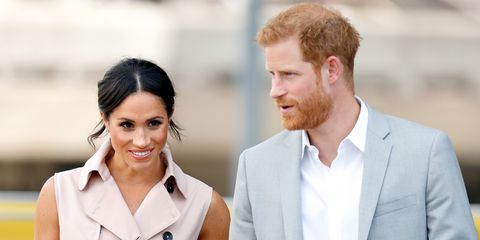 One of the reasons Prince Harry and Meghan Markle have so many fans is the fact that they’re just…well, pretty normal. They hold hands in public just like your average newlyweds would do, they’re constantly cracking quiet jokes to one another, and they’re not even afraid to go break protocol with a kiss every once in a while. Their normality amid the chaos of press attention is what makes them endearing, so this latest story about their choice of travel will only make you love them more.

Last December, six months before they were married at Westminster Abbey, pre-wedding Meghan and Harry decided to spend their New Year celebrations in Nice, France. But, rather than taking a private plane or luxury car as you might expect, the then-engaged couple just flew to the South of France on a scheduled British Airways flight alongside the general public.

The Daily Express reports via The Daily Mail that other travelers were shocked to see the future Duke and Duchess sitting alongside them on the plane in economy class. Trying their hardest to keep it subtle, Prince Harry reportedly disguised himself with a trusty baseball cap, while Meghan apparently wore a black beanie hat.

It’s claimed that they sat in the last row, near the bathrooms, and one passenger noted that Meghan even sat in the middle seat. (Notoriously the worst seat to be lumbered with, right?)

Of course, their decision to fly economy wasn’t totally on par with your last vacation—they were also casually joined by three bodyguards for the journey.

It’s unlikely that Meghan and Harry would be able to fly alongside the rest of us mere mortals anymore—the media frenzy surrounding the couple has only continued to increase since the royal wedding. We can probably safely assume that the next time they fly, for their tour of the Commonwealth, will be much more exclusive. The perks of marrying a Prince, hey?