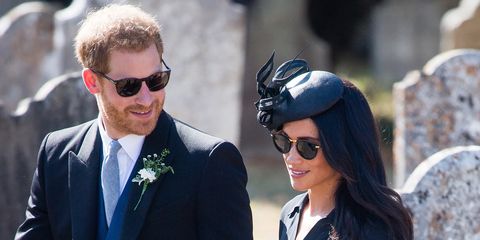 The royal family isn't big on PDA. Prince William and Kate Middleton rarely engage in any public displays of affection, and, while Meghan Markle and Prince Harry were pretty liberal with the PDA before their wedding, there has been speculation that they too would cut back on holding hands or sharing sweet kisses in public.

Today, Meghan and Harry attended the wedding of Harry's childhood friend, Charlie van Straubenzee and videographer Daisy Jenks. Harry, who has been best friends with van Straubenzee since they attended Ludgrove Prep School together, served as best man in the wedding—which just so happened to coincide with Meghan's 37th birthday.

Meghan may not have been able to spend her birthday celebrating the 37th anniversary of joining the human race, but she did get some very special birthday PDA from Harry, which is even better because we all get to feel secondhand love butterflies while looking at the pictures. Behold their adorable hand-holding at the wedding:

Of course, while public hand-holding is considered breach of royal protocol, Meghan and Harry seem to give approximately zero Fs about that rule. Since their May 19th wedding, they have famously engaged in PDA several times. Here they are locking hands (and eyes) during their royal trip to Ireland:

They slyly snuck in some light PDA during their RAF Centenary appearance:

And, then there was the kiss seen 'round the world at the Sentebale Polo Match, where they locked lips next to an adorably-awkward Nacho Figueras.

No one show these photos to the Queen. This public royal love parade can't stop.