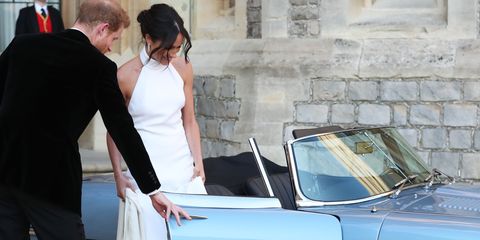 On Harry and Meghan's wedding day, they left for their reception in a Jaguar E-Type, Kensington Palace revealed. The car was originally manufactured in 1968, and had been converted to electric power. The metallic, silver blue car had major James Bond vibes and stood out among a day of standout moments.

Now, Jaguar has announced plans to offer electric versions of the E-Type to the public. I mean, you can buy a replica of Meghan's reception dress, so why not a replica of her reception ride too, right?

The luxury car company isn't reissuing the car, but is instead converting classic cars to electric power. The converted cars will be powered by lithium-ion battery packs that will allow them to travel 170 miles on one charge.

"We’ve been overwhelmed by the positive reaction to the Jaguar E-type Zero concept," Tim Hannig, director of Jaguar Land Rover Classic, explained in a press release. "Future-proofing the enjoyment of classic car ownership is a major stepping stone for Jaguar Classic."

Before you rush to order your own Meghan-mobile, keep in mind that the price tag is steep—the cars are going to run customers about $450,000 (£350,000) and won't be available until 2020, according to the Daily Mail.

The car that Meghan and Harry drove on their wedding day featured a steering wheel on the left side—which is standard in the United States, but not in the UK. According to the Daily Mail, it was likely because the car was originally built to be exported to a different country. It also served as a perfect nod to Meghan's American heritage, of course.