Today's Top Stories
1
What Makes an Olympic Moment?
2
The Anti-Choice Endgame: Power And Control
3
Nordstrom's 2021 Anniversary Sale Is the Best Yet
4
Give Domestic Workers the Protections They Deserve
5
The Absolute Best Red Lipsticks on Earth
Rebecca SmeyneGetty Images

From an outside perspective, it looks like the Kardashian-Jenner sisters have truly got this parenting thing locked down ( it is funny how much private nannies and romantic, child-free getaways can help). They even managed to coincide their pregnancies to be one after the other with some impressive organization, but it it looks as though the cute mommy-moon period could be officially over. Khloe’s latest move as a new mom has caused friction through the family, after she chose one of her sisters over the rest, to be named as daughter True Thompson’s legal guardian.

In a new teaser for Keeping Up With The Kardashians, Khloe sits her sisters down to make the announcement regarding the protection of her daughter, who was born in April this year, and SURPRISE! Khloe, 36, chose Kim, 37, as True’s legal guardian, and Kourtney, 39, is less than impressed by her decision.

Koko explained that she’d come to the conclusion under the knowledge that Kim is apparently a “stricter” mother than Kourt. "I can't make anything official until the baby is born,” Khloe told the show, which was filmed back during her pregnancy. “But I am going to probably have Kim as the legal guardian if, god forbid, something happens.”

She continued: “I don't know my parenting style until I have a baby, but from what I envision my parenting style to be, I do think it'll be more like Kim. A little more stricter. Watching Kimberly be a mom, I really respect her parenting skills — not that I don't respect Kourtney's, I relate to how Kim parents more.”

Kourtney hasn’t given up hope on changing Khloe's mind, though. Later on, the eldest Kardashian sister said: “I'm a little bit disappointed that I'm not the guardian, but honestly, you don't know what your parenting style is until you have kids. I think once Khloe has her own daughter and is really a mom, then maybe she will realize that we have more in common than she thinks as far as parenting styles. You never know, Khloe might switch back to me.”

Labelled the "least interesting looking Kardashian," and now this blow? Poor Kourt really can't catch a break at the moment. 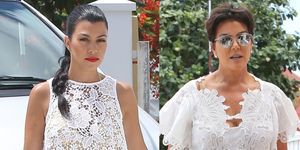 13 Times Kris Jenner Stole Her Kids' Clothes
Lucy Wood Contributor Lucy Wood spends most of her time writing about celebby things, reading books, and waiting for the glorious day that she have enough millions for a pet sloth.
This content is created and maintained by a third party, and imported onto this page to help users provide their email addresses. You may be able to find more information about this and similar content at piano.io
Advertisement - Continue Reading Below
More From Celebrity
Charles Expertly Ignored Boris Johnson's Snafu
How Kitty Spencer's Wedding Dress Honored Diana
Advertisement - Continue Reading Below
Dolly Parton On the #FreeBritney Movement
Will & Kate Are Nervous About George's Future
George Won't Be Forced to Go to Boarding School
Diana Would Have Written a Memoir Too, Friend Says
A Slice of Diana's Actual Wedding Cake Is For Sale
Matt Damon Trolled Ben Affleck and Jennifer Lopez
This Old Video of the Queen Saying "Nah" Is LOL
Diana Had a Secret Message on Her Wedding Shoes