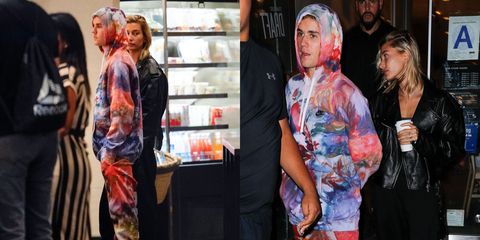 It's been a very emotional week for anyone who cares about Justin Bieber and Hailey Baldwin.

On Friday, reports surfaced that Justin and Hailey had gotten married on Thursday, after a two-month engagement. "Sources" claimed that the surprise wedding went down at New York City courthouse (which seemed to be backed up by photos of the couple entering a courthouse hand-in-hand shared by TMZ on Thursday). A TMZ source claimed that Justin told the judge, "Thanks for keeping it on the DL."

So all that happened and people were like "ZOMG, JUSTIN AND HAILEY ARE MARRIED."

Then Hailey stepped up to shut down the rumors. In a since-deleted tweet, she wrote, "I understand where the speculation is coming from, but I’m not married yet!" TMZ subsequently change course and reported that the couple would wed as early as next week.

So, yeah, a veritable whirlwind, to say the least.

Now, for the latest in the "Are Justin Bieber and Hailey Baldwin married yet?" saga: Justin and Hailey stepped out for some Starbucks in New York on Saturday night and Justin made what appeared to be a very deliberate point of not letting anyone take a picture of his lefthand (and, more importantly, the ring finger that might be sporting a wedding band if he were married).

Holding hands with Hailey to obscure his hand from the cameras:

Burying his left hand in his pocket:

And straight up hiding his hand behind his back:

Is Justin hiding a wedding ring? Is he trolling everyone who cares if he's wearing a wedding band? Was his hand just cold or something? It's impossible to say.

This content is imported from {embed-name}. You may be able to find the same content in another format, or you may be able to find more information, at their web site.
Kayleigh Roberts Contributor Kayleigh Roberts is the weekend editor at Marie Claire, covering celebrity and entertainment news, from actual royals like Kate Middleton and Meghan Markle to Hollywood royalty, like Katie Holmes and Chrissy Teigen.
This content is created and maintained by a third party, and imported onto this page to help users provide their email addresses. You may be able to find more information about this and similar content at piano.io
Advertisement - Continue Reading Below
More From Celebrity
Princess Eugenie's Son Got to Meet Prince Philip
Ashley Graham Is Having Twin Boys
Advertisement - Continue Reading Below
Gabrielle Union Danced Topless at a Window
Ben Affleck Is "in Awe" of Jennifer Lopez
Princess Beatrice Has Given Birth to a Baby Girl
Gigi Hadid's Mom Shared Sweet Pics of Khai
Kate & Will Probably Won't Have a Fourth Child
Ben & Jen Plan to Spend the Holidays Together
Kate & Will Are "Anxious" About Harry & Meghan
Mandy Moore Calls Breast Pump Emmy's MVP Accessory