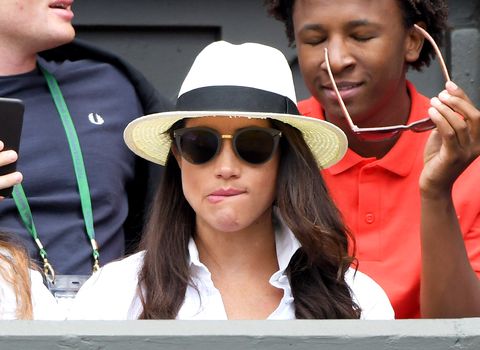 Being royal comes with a lot of privileges (world travel, vacations in castles, tiaras you can borrow after 6 pm sometimes). But, in exchange for the perks, you lose the ability to do normal things, like taking a Pilates class or shopping at Whole Foods.

Meghan Markle, unable or just unwilling to give up these normal human activities, has reportedly taken to wearing disguises around London so she can leave Kensington Palace without being mobbed by fans and photographers.

According to People, the Duchess of Sussex uses a tried and true Hollywood disguise for her excursions—a baseball cap.

Meghan going "incognito" to yoga class in Toronto in 2017.

"She spends most of her weekends in the Cotswolds with Harry," a source told the magazine. "When she does venture out to Pilates or to get her hair done, she normally goes incognito under a baseball cap."

Meghan's favorite place to sneak away to is apparently the local Whole Foods, which is a short walk from the palace.

“The only other place she has visited regularly is Whole Foods, which is little more than five minutes away from Kensington Palace," the People source explained. "That way she can quickly sneak in and out without anyone noticing it’s her."

As The Cut notes, a photo of a woman who resembled Meghan and was wearing the exact "disguise" described by People's source made the rounds on Twitter earlier this week.

So incredibly enough, walking by @kensingtonroyal -we spotted this beautiful, woman with a familiar air”outside the entrance to the private residence where Harry& Meghan live . MEGHAN!? her dog was doing his business. She couldn’t have been sweeter. #princessespickuppooptoo pic.twitter.com/G0SkQelmPE

"So incredibly enough, walking by @kensingtonroyal — we spotted this beautiful, woman with a familiar air outside the entrance to the private residence where Harry & Meghan live. MEGHAN!?," entertainment reported Lisa Petrillo wrote with the photo. "Her dog was doing his business. She couldn’t have been sweeter."

Meghan might need to change her disguise. I vote for those classic Groucho glasses with a mustache and fake nose attached.

[H/T People]
Kayleigh Roberts Contributor Kayleigh Roberts is the weekend editor at Marie Claire, covering celebrity and entertainment news, from actual royals like Kate Middleton and Meghan Markle to Hollywood royalty, like Katie Holmes and Chrissy Teigen.
This content is created and maintained by a third party, and imported onto this page to help users provide their email addresses. You may be able to find more information about this and similar content at piano.io
Advertisement - Continue Reading Below
More From The Ultimate Guide to the Royal Family
Will and Kate Attend the ‘No Time to Die’ Premiere
Harry Carries Briefcase That Reads "Archie's Papa"
Advertisement - Continue Reading Below
Meghan Markle and Prince Harry Arrive in NYC
Princess Beatrice Reveals Daughter's Name
How Meghan & Harry Spent Their 2-Year Anniversary
Charlotte Has Two Major Milestones Coming Up
Kate Made a Very Common Shoe Shopping Mistake
The Queen Is Lawyering Up, Apparently
Harry & Meghan Are Still Close to the Queen, TYVM
Archie Inspired Harry and Meghan to Take a Stand