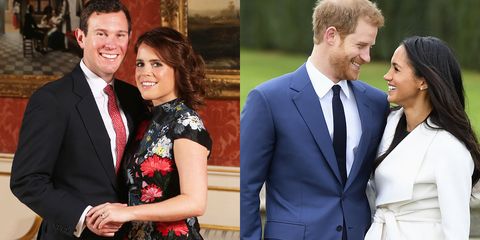 On October 12, the second royal wedding of the year will officially go down when Princess Eugenie walks down the aisle with Jack Brooksbank.

This week, we got our first look at Eugenie's wedding invitations, courtesy of Vanity Fair.

Here's what the invitations say:

"His Royal Highness The Duke of York KG and Sarah, Duchess of York, request the pleasure of the company of [insert name] at the Marriage of their daughter Her Royal Highness Princess Eugenie of York with Mr. Jack Brooksbank at St. George's Chapel, Windsor Castle on Friday 12th October, 2018 at 11 a.m. followed by a Reception at Windsor Castle."

In addition to the 850 official guests, Eugenie and Jack have also extended invitations to 1,200 members of the public, much like Prince Harry and Meghan Markle did on their big day in May.

Eugenie's invitations feature Prince Andrew's badge, which includes the white rose of York, in blue. Harry and Meghan's, on the other hand, feature Prince Charle's crest in gold. The crest at the top of the invitations signifies who paid for the wedding. That's why Prince William and Kate Middleton's featured Queen Elizabeth's crest (in gold, of course), since she hosted their wedding.

Here are some other royal wedding invitations over the years, for further comparison:

Kayleigh Roberts Contributor Kayleigh Roberts is the weekend editor at Marie Claire, covering celebrity and entertainment news, from actual royals like Kate Middleton and Meghan Markle to Hollywood royalty, like Katie Holmes and Chrissy Teigen.
This content is created and maintained by a third party, and imported onto this page to help users provide their email addresses. You may be able to find more information about this and similar content at piano.io
Advertisement - Continue Reading Below
More From The Ultimate Guide to the Royal Family
Peek Inside the Cambridges' Country Home
Harry Is Heartbroken About His Family Situation
Advertisement - Continue Reading Below
William and Harry Could Fight Over Diana's Legacy
William Reveals Which of His Kids Is the Cheekiest
Rob Lowe: Prince Harry Is Rocking a Ponytail Now
A Look Back at Princess Anne's Life in Photos
A Look at Royal Family Portraits Through the Years
Diana's Ex Is Blasting Her Infamous BBC Interview
Meghan Markle Can No Longer Be a U.K. Citizen
Harry & Meghan Quit Social Media Because of Trolls