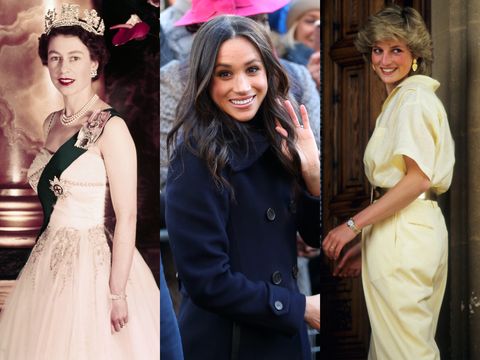 If you hear that someone is breaking royal protocol, there's a good chance your mind goes immediately to Meghan Markle. From talking about her royal relationship in Vanity Fair to (GASP) closing her own car door, the Duchess of Sussex has been bucking royal traditions since her engagement to Prince Harry.

Related Story
The Strange Rule For When The Royals Have Children

Meghan's signature openness has made her a star of the new royal documentary, Queen of the World, in which the former actress discusses intimate details from her wedding day. Speaking to Entertainment Tonight, the doc's executive producer, Nick Kent, explained why Meghan's candor in the doc was such a big deal — and how it actually aligns her with other royal women, like her mother-in-law, the late Princess Diana, and even the queen herself.

“A powerful example of that is the piece of blue fabric in the dress. That was a very private gesture that she made, to have that piece of fabric sewn in, nobody knew about that. The fact that she was happy to share that, you know, it’s quite an intimate insight," he explained. "The other thing, is that it’s a mistake to think that the monarchy stays the same. In a sense, reinventing how you fulfill your duties as a member of the royal family is something that’s not a new thing. So in a funny way, she’s kind of following in the tradition of the queen herself and Princess Diana."

Both Diana and Elizabeth did do their share of royal rule-breaking in their day. Diana famously bucked royal tradition in several ways to make sure her sons, Prince William and Prince Harry, had normal childhoods (which included such childhood rites of passage as going to see movies and eating McDonald's and attending nursery school). The Princess of Wales also took iconic fashion risks as a royal.

Earlier in her reign, Elizabeth broke tradition by welcoming her husband, Prince Philip, into the delivery room for the birth of their youngest child, Prince Edward. More recently, the queen ignored royal tradition and hugged Michelle Obama (who wouldn't?). Clearly, Meghan is in good company when it comes to breaking royal rules.