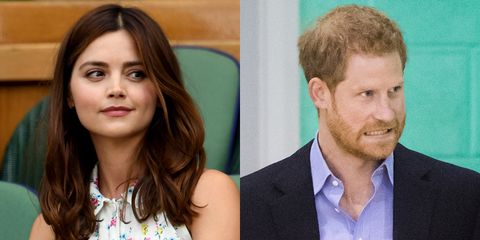 You might assume that being an actual royal family member, and sixth in line to the British throne, would mean that you’re immune to the same, cringeworthy moments that us mere mortals have to contend with, but Duke of Sussex Prince Harry isn’t so lucky.

During his top secret trip to Amsterdam with wife Meghan Markle last weekend, Harry attended the star-studded launch party of a new Soho House location. Sounds great, but the celebration also provided an embarrassing run-in with a high-profile ex—while Meghan was right by his side. Yikes, we’ve all been there.

Vanity Fair’s royal correspondent Katie Nicholl reports that Harry came face-to-face with his ex, actress Jenna Coleman, during a breakfast gathering as part of the Duke and Duchess’s recent weekend vacation. And yep, it sounds like it was every bit as awkward as you might imagine.

“Harry had to walk straight past Jenna to get to his and Meghan’s table,” an alleged onlooker told Vanity Fair. “It was pretty awkward and some of the other guests were commenting on it.

It seems that Harry handled things in typical guy-style and pretended it wasn’t happening. Luckily, as you might expect, Meghan was totally chill about the whole thing and remained completely unbothered. “Jenna looked down while Harry looked straight ahead, while Meghan didn’t seem to notice. She sat through breakfast with a smile on her face, but Harry looked a bit uncomfortable. He’d been super friendly saying hi to everyone, but he didn’t even acknowledge Jenna.”

If you, like the rest of us, are wondering when Prince Harry and Jenna Coleman were ever a thing, the Duke of Sussex was rumored to be casually dating the Doctor Who and Victoria star back in June 2015, around a year before Meghan was on the scene the following summer.

At the time, a Us Weekly source revealed: "They'll never be anything serious because of their schedules. He’s off to South Africa and she's going to be filming Doctor Who in the States. But for now, they're just enjoying each other's company.” Incidentally, Jenna attended the Soho House event with boyfriend Tom Hughes, who was also attempting to "woo" her at the same time as Harry in 2015.

Just when you thought there were no more lessons left for Meghan Markle to teach us—always remain calm and enjoy eating your granola with a smile if you ever encounter your partner’s ex over breakfast.

Related Story
All of Prince Harry and Meghan Markle's Exes
Lucy Wood Contributor Lucy Wood spends most of her time writing about celebby things, reading books, and waiting for the glorious day that she have enough millions for a pet sloth.
This content is created and maintained by a third party, and imported onto this page to help users provide their email addresses. You may be able to find more information about this and similar content at piano.io
Advertisement - Continue Reading Below
More From The Ultimate Guide to the Royal Family
The Queen's Corgis Are Helping Her With Her Grief
Charles is Looking Forward to Seeing Harry Again
Advertisement - Continue Reading Below
Will & Harry to Walk Together at Philip's Funeral
Prince Charles Addresses Prince Philip's Death
Prince William Pulls Out of 2021 BAFTA Appearances
Prince Philip Said He Had No Desire to Live to 100
The Queen Was by Prince Philip's Side When He Died
Prince Harry Is "Really Upset" Over Philip's Death
Will Harry & Meg Attend Prince Philip's Funeral?
The Queen Is Hopeful Prince Harry Will Return Home