3
Fall Sweaters to Snuggle Up In
4
We Should Have Known About J.K. Rowling's Views
5
The Oral-B iO Toothbrush Replacing My Dentist RN
Getty Images

As a pair of the world’s most instantly recognizable faces, it’s always impressive when Prince Harry and Meghan Markle manage to do anything under the royal radar. Recently, the Duchess of Sussex was reported to have returned to her old home of Toronto to catch up with her nearest and dearest with nobody capturing a single photo, and the couple were even thought to have enjoyed a summer stay with the Clooneys at their private villa without attracting attention.

But it seems as though the Duke and Duchess of Sussex have managed to slip away all over again just this week, somehow spending a top secret weekend away in the Dutch city of Amsterdam. At this point, I’m starting to wonder if Prince Harry and Harry Potter share that invisibility cloak.

Meghan and Harry reportedly headed to Amsterdam last weekend to celebrate the opening of the new Soho House outpost, having made the cut for the A-list celebrity guest list. Apparently, they joined the likes of Eddie Redmayne, Lily Cole, and Stanley Tucci amongst others, for a three-day-long party at the exclusive venue. It would make sense that the Duke and Duchess took a low-key vacation for the Soho House opening, as they’re already known fans of the private members’ club.

In fact, they even chose the plush London branch as the venue for their first date back in 2016. Meghan is also known to be a close friend of the director, Markus Anderson, and has previously taken time away at the peaceful countryside retreat, Soho Farmhouse, based in the couple’s favorite getaway spot, the Cotswolds.

According to sources at the Evening Standard, guests enjoyed a delicious dinner at Cecconi’s restaurant on Saturday night, and indulged in pampering treatments at the Cowshed spa. While other invitees took part in a guided tour of the city, Meghan and Harry politely bowed out of the more public activities.

With their impressive ability to somehow go completely unnoticed at times like this, it really wouldn't be all that surprising if Meghan and Harry manage to keep a pregnancy announcement under wraps until their first child is nine years old. 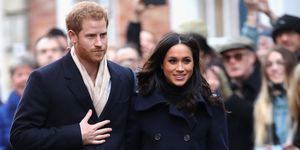