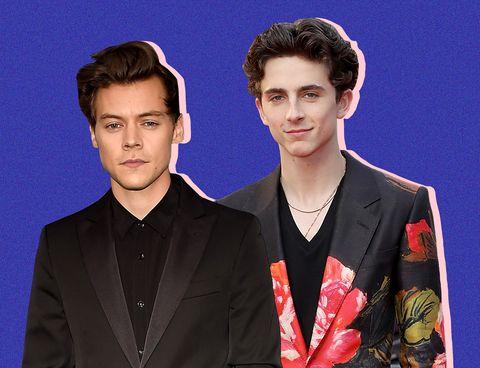 Hello, majestic mandarin ducks, and welcome to another edition of This Week in Timothée Chalamet.

Man, what a week. Politically, things could not have been more nightmarish: Heartbreaking violence, misdirection in the form of anti-immigrant fear-mongering, and a president who’s seemingly uninterested in doing the right thing—this is what dominated the headlines. It was awful, and if you're still reeling you need to be kind to yourself right now.

But first! The next time we talk, the midterm elections in the U.S. will have come and gone. This is the most important election most of us have ever lived through, a chance to show the rest of the world that we choose freedom and compassion and neighborliness (in the Mr. Rogers sense of the word). It could be a referendum on fear-mongering and bigotry and greed, and the people who want to continue with that status quo are trying everything in their power to make sure that good people like you don't show up.

Which is why you must cast your ballot on November 6. If you need help finding your polling place or checking your registration, head over to Vote.org.

Now where were we? Ah, yés:

What what what. I don’t even...It’s like...And I saw it and just...How did this...Oh, c’est le meilleur des mondes possibles! Happy days are here again!

The story dropped Thursday morning on i-D, the British magazine owned by Vice, but was first preempted by this vague and arousing tweet:

We have something very, very exciting to share with you today.... stay tuned 👀 pic.twitter.com/Oti6HgtPCk

What could it be?, we all thought upon awakening atop our fainting couches. And then it was revealed:

Harry Styles interviewed Timothée Chalamet! The only two good white men—end of list!—spoke to one another at length! I bet you didn’t realize I was dictating this entire column to a medium through a Ouija board because I am dead! Feliz dia de los muertos, mi alma, porque estoy muerto!

Here are some of the stand-out quotes which, I remind you, I have collected from beyond the graaaave:

T: ...I thought one of the traps of this role, especially as a nervous young actor, was going to be to lean into the seriousness of it.

Oh my god, “a nervous young actor.” I couldn’t possibly continue after that. Go on then, go on!

H: Can you still eat peaches?

T: [Laughs] Umm I can, but not without thinking about it…

Are you there Vishnu? It’s me, Cady. What kind of karma do I need to pull in order to be reincarnated as a peach eaten by Harry Styles while he's thinking about Timothée Chalamet?

H: ...I think it’s really important to have those moments because if you don’t then there’s an expectation that life is supposed to be this great and I think that’s super dangerous.

This entire exchange is really sage, but also revealing: The key to being an approachable celebrity, as Timmy and Harry both are, is to understand that your position is rare and mostly luck-based. It's extremely self-aware (like we'd expect anything less).

H: ...I think there’s so much masculinity in being vulnerable and allowing yourself to be feminine, and I’m very comfortable with that. Growing up you don’t even know what those things mean. You have this idea of what being masculine is and as you grow up and experience more of the world, you become more comfortable with who you are...

T: That’s really beautiful and inspiring, and certainly it goes back to feeling comfortable in chaos and creating in madness....If us having this conversation, in any infinitesimal way, can help anyone, a guy, a girl, realize that being vulnerable is not a weakness, not a social barrier...

This entire exchange (condensed here, worth reading in full) is so important, and I'm glad these two famous men are talking about it so openly. The patriarchy—those social stigmas in place for too long that tell everyone how they should act—hurts everyone, and these two have just illustrated a way of moving beyond that makes space for being a real person. It's one of the most hopeful things I've read in ages.

T: I don’t know if it means anything from me, but I thought you were really fucking excellent in that movie.

Timmy praising Harry in Dunkirk. Yes. So gracious. So thoughtful. So humble. Can Harry be in the next Call Me By Your Name?! Please, Luca?!

The whole interview is chef's kiss and I could easily just reprint it here and go through why every line is perfection—especially the one in which Harry recommends reading the excellent Rob Sheffield book, Love Is a Mix Tape, which you really must do—but that would take hours and you could just read the thing yourself (you almost certainly already have). I know I’ll be returning to this story often, albeit as a weary ghost whose soul is now forever bound to this world.

Timmy went on the road for a great cause!

Timmy plays Nic Sheff, author of a memoir about his battle with meth addiction, in Beautiful Boy, out in theaters now. This week, Sheff and Tim spent some time on the road, answering audience questions at screenings and shining a light on the dangers of addiction. The duo stopped in St. Louis, Austin, Dallas, and Minneapolis, those lucky towns.

At one event, Timmy even revealed a little bit about what went into his heart-wrenching performance, according to People:

At St. Louis’s Hi-Pointe Theater, Chalamet was asked how he best prepared to play Sheff. “A little of everything,” the actor told the crowd. “Nic and David’s book helped a lot. Spending time in out-patient and in-patient programs. The key is not to play a drug addict, but to play a human being addicted to drugs.”

It’s really great that Timmy is using his platform for something this important. More actors should do this kind of outreach.

Timmy may be aware of our existence!

Sorry for the self-promotion, but I will be brief: In an interview with the Detroit News (thank you for the find, @love_zhenn!), the interviewer asked Timmy about how he’s dealing with stardom and pointed to our column as an example of the sometimes alarming rabidity of his fandom! #BLESSED!

His mop of brown hair became an object of fixation: Tumblrs were erected in his honor, and Marie Claire began running a recurring “This Week in Timothée Chalamet” feature.
To combat the weirdness of becoming a meme, Chalamet dove into his work immediately after awards season, playing Henry V in next year’s Shakespeare adaptation “The King” alongside Joel Edgerton and Robert Pattinson.
“I was both literally and metaphorically back in the mud, and I felt like I was learning again,” he says. “It was a clear reminder of why I’m doing this.”

Oh my god, Timmy thinks we’re weird! He maybe has acknowledged that we exist! I don't need a lot in these trying times, this is enough!

And that’s the news. Please, go vote. And have a splendid weekend.