Today's Top Stories
1
What Wearing Purple on Inauguration Day Means
2
What Biden Has Pledged to Do In His First 100 Days
3
Moving Forward: A Better Future for Caregivers
4
Listen to the Best New Love Songs of 2021 (So Far)
5
Poet Amanda Gorman's Ring Is Full of Meaning
WPA PoolGetty Images

It's been a rough month for the Beckham family. David and Victoria Beckham's country estate in the Cotswolds has been the target of burglars not just once, but twice in the span of a month.

The first attempted break-in went down last month, when a group of "balaclava-clad raiders" were spotted by the Beckhams' security team on the security system's CCTV, The Sun reports. The security team immediately called police to the famous couple's £6 million home in Great Tew, Oxfordshire, but the would-be burglars were reportedly "chased away by guests at the nearby Soho Farmhouse," according to The Sun.

The robbers didn't make it into David and Victoria's home, but they did reportedly prop a ladder against the building to peek in at the valuables visible on the first floor.

Sources close to the Beckhams said the incident rattled the couple, particularly Victoria. "David and Victoria are devastated by this," the source told The Sun.

Now, the Mirror reports, David and Victoria's home has been targeted a second time by burglars. Once again, the would-be thieves reportedly did not make it far before being chased off the property and, thankfully, the Beckham family was not home at the time of either incident.

"This now feels like a sustained attempt to target the house when they’re away," a source told The Sun after the second attempt to break into the home. "Luckily they had laid on extra security after the last incident—including several staff and dogs—who were able to protect the property. Otherwise this could have had a very different outcome. They are re-evaluating their security again and will bring in more if they need to." 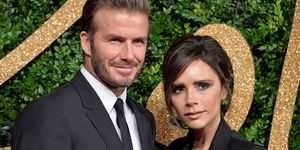 Here's How Victoria Beckham Fell for David Beckham
Kayleigh Roberts Contributor Kayleigh Roberts is the weekend editor at Marie Claire, covering celebrity and entertainment news, from actual royals like Kate Middleton and Meghan Markle to Hollywood royalty, like Katie Holmes and Chrissy Teigen.
This content is created and maintained by a third party, and imported onto this page to help users provide their email addresses. You may be able to find more information about this and similar content at piano.io
Advertisement - Continue Reading Below
More From Celebrity
J.Lo Wore Head-to-Toe Chanel for the Inauguration
The Queen Sent a Private Message to Joe Biden
Advertisement - Continue Reading Below
Lady Gaga's PDA with Boyfriend Michael Polansky
Twitter Reacts to Lady Gaga at the Inauguration
Lady Gaga Gave a Powerful Inauguration Performance
Lady Gaga Brings the Drama to D.C.
Chrissy Accidentally Spilled Inauguration Secrets
Meghan's Lawyers Slammed Publication of Her Letter
William's Private Secretary Quits After 10 Months
The 50 Most Popular Episodes of ‘Friends,’ Ranked